The Case for Combining Bodybuilding and Olympic Lifting - Vern Weaver 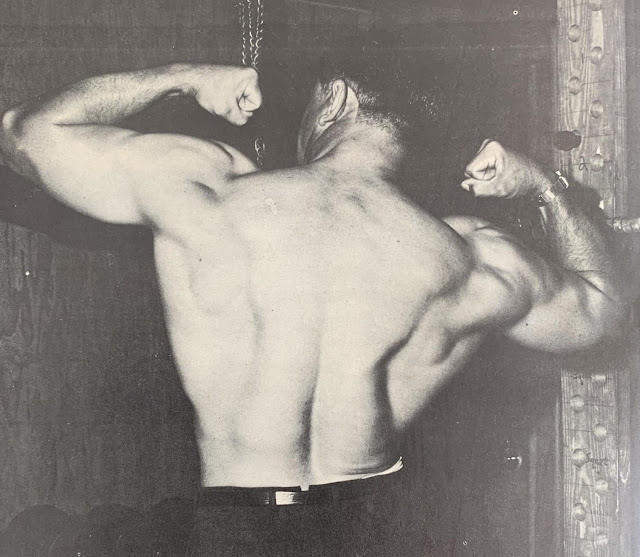 It has long been my belief that bodybuilding and Olympic lifting should be combined in order to produce the best possible results in each category. In so many cases bodybuilders and weightlifters tend to isolate or limit their workouts schedules to what seems to be in vogue.

I interviewed several celebrities of our great sports of lifting and bodybuilding. I asked them to tell me exactly what their views were on the subject. First, I talked to Dick Smith. Dick was the trainer on the 1963 World Championship team. He has been active as a barbell man for about 25 years. I certainly consider him an expert. He has been training with Bill March and myself since 1955. We both owe much to this man.

I asked Dick why a bodybuilder should practice lifting from time to time. He replied, "If for no other reason, to eliminate weak points in his physique." He recommended rack work.

I also asked him to choose an exercise every bodybuilder should never neglect. You'll never guess the answer -

I must agree. It certainly is a great exercise.

He also stressed the fact that every lifter should do bodybuilding exercises to alleviate training boredom.


Another point he mentioned which is of great interest is that all good lifters develop very powerful spinal erector (lower back) muscles which tend to sway the lower back, and unless a proportionate amount of abdominal exercise is employed to counteract this situation some adverse effects may result. Therefore, Smith feels as though every lifter should do a sufficient amount of abdominal exercise.

NOTE: We had a lifter in York who refused to do any abdominal exercises. He may never lift again because of a permanent back injury. This situation was actually created because of improper exercise. A better term might be incomplete exercise. I hope you will learn a lesson though this man's mistake. Lifters, remember to do plenty of abdominal strengthening exercises.

Smith also feels that bodybuilding exercises such as concentration curls and excess pectoral exercises are a complete waste of time as far a a  lifter is concerned. So ended my little talk with Mr. Smith.

Next on my list was Tommy Suggs. I asked him if and why he would go on a bodybuilding routine from time to time. He said that he had done some bodybuilding and intends to continue in this in the future. The reason he does so is because he becomes stale and needs bodybuilding to help him revitalize himself.

Tommy also made one very important technical point which all lifters should consider. When you bodybuild you activate the circulatory system much more than when you do single lifts or single repetitions, therefore it stands to reason that bodybuilding will help a lifter attain a higher degree of physical fitness (a very important factor).

Naturally, I wanted to know what exercises he employed. He wouldn't tell me so I broke his typewriter - then he told me everything I wanted to know. He does leg presses, incline dumbbell presses, bentover rows, upright rows, good morning exercises, standing dumbbell laterals and curls. Did you take notice that he forgot to mention situps -- I'll talk to him about that. All the exercises are done 3 or 4 sets and 5 to 9 reps.

Just as I completed my little chat with a big Texan, a little Texan appeared on the scene. It was Homer Brannum. Homer is the 1964 Senior National runner-up in the lightweight division. He is a very strong man. I asked Homer what he thought of combining lifting and bodybuilding. This is what he had to say.

"I think every lifter should do at least two months of nothing but bodybuilding every year."

Of course, he limited the exercises to the ones which would make him a better lifter, because he is primarily interested in lifting. I asked him how and why he arrived at his conclusions. He told me that he visited York in October of 1962, and during that visit he learned of isometric training. After this visit he began training four times weekly. On Monday, Tuesday and Wednesday, he would do his isometric workouts, and on Saturdays he would do the three Olympic lifts. He was progressing satisfactorily, but he didn't feel satisfied with his workouts - he didn't feel he was doing enough exercise. He needed more stimulation, so he began incorporating bodybuilding exercises into his regular routine. He admitted that his general appearance greatly improved and that his strength was more apparent than ever. He also mentioned that his arms grew over one inch during this period. Who says lifters don't care about their appearance? He obviously does.

This is the routine that Homer described to me:

After finishing his rack routine, he continues by doing bench presses for one set of 3 reps  He then reduces the weight and does 2 more sets of 8 reps. He continues by reducing the weight even more and lowering the weight to the neck instead of the chest. 4 sets of 9 reps of these are employed.

The next exercise is the french press which is repeated 3 sets of 5 reps. He obviously thrives on triceps exercises because he continues even further by doing 1 set so 25 reps of triceps extensions on the lat machine.

He completes the workout by doing a very liberal amount of situps or leg raises.

As long as I had gone this far, I thought I might as well invade the Hall of Fame, so I called Tommy Kono in Hawaii. After the usual greeting, I asked him for his views on the subject. Kono had this to say:

"Every aspiring lifter should do regular bodybuilding for at least one year before he attempts to become a full-fledged weightlifter."

As you know, Tommy has been a World Champion no less than eight times. He has held more world records than any lifter on earth. He also has been a Mr. Universe winner three times. He was chosen in 1955, 1957, and 1961. I almost forgot to mention the Mr. World title that he won in 1954.

Kono also advised that every bodybuilder should do lifting exercises to fully develop the back and trapezius muscles. He, as the others, thought that bodybuilding was very helpful to the lifter in two ways:

1) It will help him maintain a better mental attitude toward lifting.
2) It helps the lifter develop his weak points.

Tommy said that he does nothing but bodybuilding exercises for two to three months per year. He also advised the practice of other sports such as track and field. Obviously, Tommy Kono is in favor of combining weightlifting and bodbuilding.

I figured as long as I was interviewing all the Texans under 300 pounds, I wouldn't dare skip Tony Garcy. This great American champion in his lastest performance broke every American lifting record in his class and was capable of even more. I asked Tony about his present training program.

He informed me that he was presently training six times weekly. Each workout consists of the three Olympic lifts coupled with three assistance exercises. The assistance exercises consist of one pressing movement, one pulling movement, and one squatting movement. He employs 4 sets of 5 reps on all of these exercises. The reason he repeats the movement for 5 reps instead of just 2 or 3 is because he feels he gets much more muscle stimulation by using this method. He feels that it is very important for a lifter to develop stamina.

When he wants to build more strength he uses the rack, and isometrics, and he employs single reps to test himself.

As far as Tony is concerned, technique is of prime importance in lifting. Technique is followed in importance by speed, endurance, and mental attitude. In order to attain this superb technique, he uses light weights and single reps.

It is his conviction that every serious lifter should indulge in an extensive personal research program in order to improve his technique, speed, endurance and mental attitude.

Why should you, as a bodybuilder, combine weightlifting with your normal routine?

I can think of several reasons.

1) You will become a much stronger than average bodybuilder.
2) You will develop a more natural looking (symmetrical) physique.
3) You will gain more respect as an athlete.
4) You will learn the value of competition.

There is another very interesting aspect. The majority of our past Mr. America winners have been lifters at some time during their career.

Please, let me continue by showing you, the bodybuilder, how to include weightlifting in your present routine.

In the future, continue a productive routine which you enjoy, but do not forget to include either cleans or high pulls. Try doing heavy presses once or twice a week. Also include some heavy deadlifts once a week (but no more). Don't forget to include plenty of strenuous leg work.

Being a fairly good lifter as well as a bodybuilder is also a matter of self pride. You should attempt to become and remain superior as an athlete as well as a physical specimen.

In other words,
Live up to your reputation as a STRONG MAN.