Keep Your Head in the Squat - Les Cramer 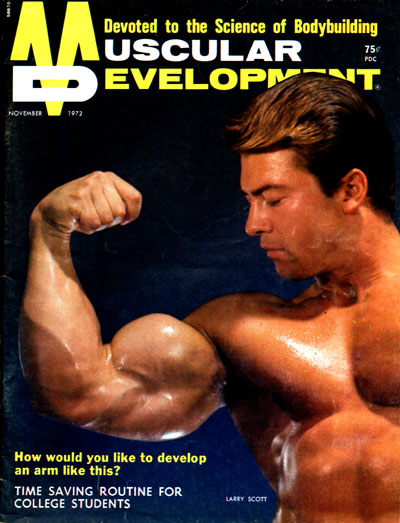 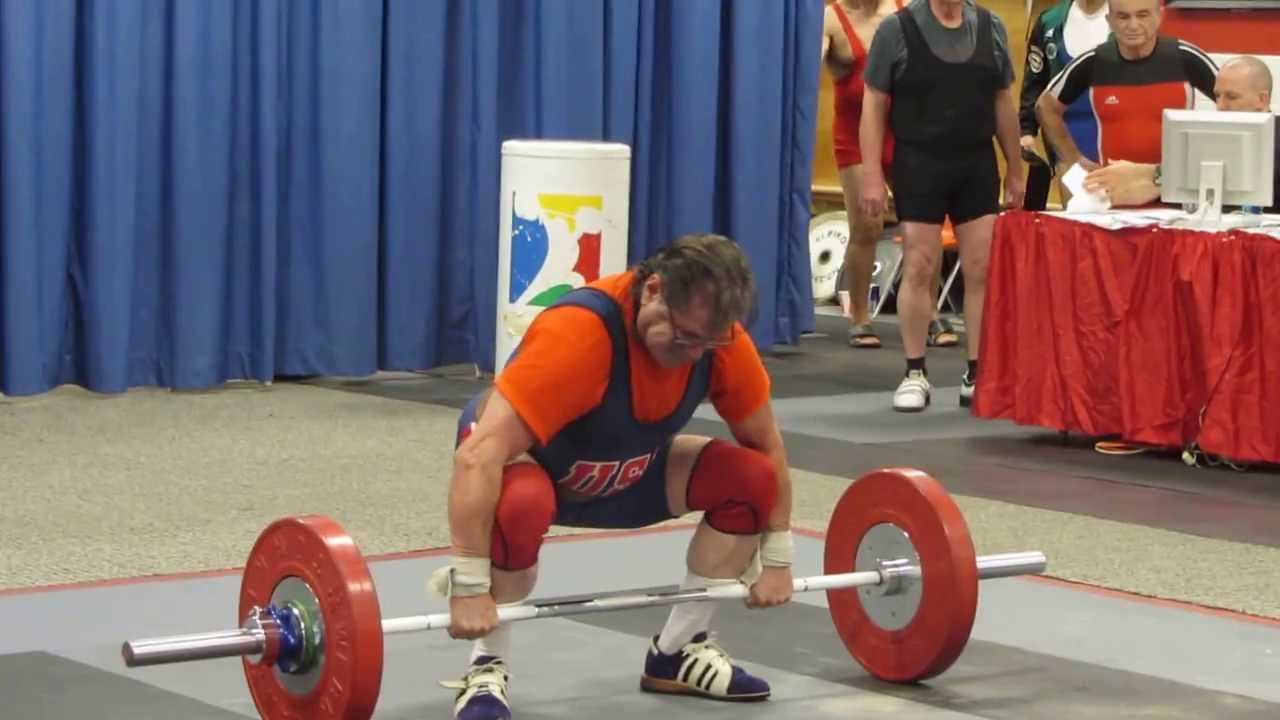 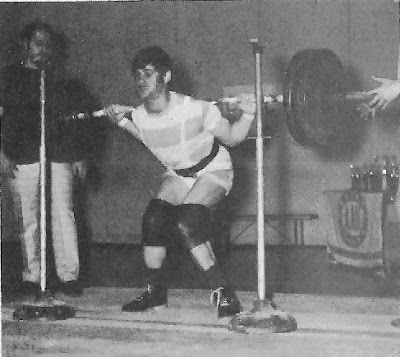 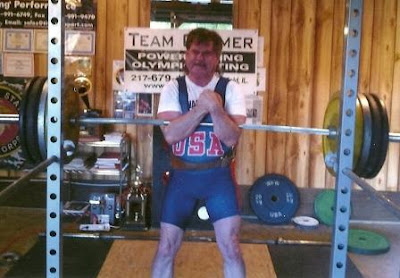 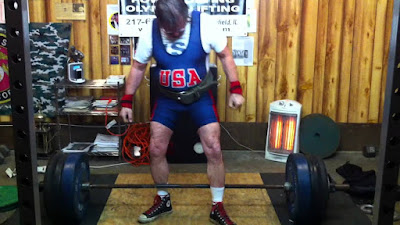 
We discussed the head position while deadlifting in the July issue of Muscular Development.
Note: MD - July 1972: For the Deadlift . . . Heads Up!
This month we'll pick apart the squat.

Many new lifters go to meets and hear a coach yelling, "Heads up!" and they get the impression that the head must be kept looking up all the time. This is not true. By keeping the head up throughout the squat you can lose your balance. By letting the head go into a more natural position, you have a better chance of maintaining your balance.

Probably the best know squatter on our team, the Allegheny Mountain Weightlifting Club, is Don Reinhoudt (below). Don held the American record in the super-heavyweight class at 832.75 pounds. Don's strength lies in his legs; this is very evident by his comparatively low deadlift. So he uses more of a straight back style than I would like to see. His head position is held too high at the bottom of his lift.

Tony Fratto (below) probably uses his head position as close to perfect as anyone I know.

Photo above from en.allpowerlifting.com/
Photo below from the article. 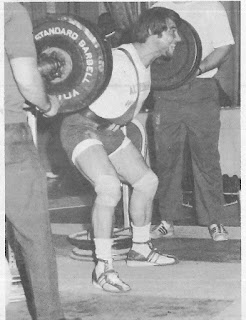 He has officially squatted with 620 in the 181 lb. class and at the Great Lakes Championships early this summer, he squatted with 700 in the 198 class. Tony starts with his head slightly down and as he descends, his head follows the flow of his body an in the bottom position he is looking down, not up.

In no way can you extend your buttocks, stay tight, stop at parallel and keep your head up. While coming up with the weight, the secret is to again follow the flow of the body. The head moves up slightly till you reach the half-squat position, then the hips should move forward.

Force the head up as high as you want. This will help pull you through the sticking point. 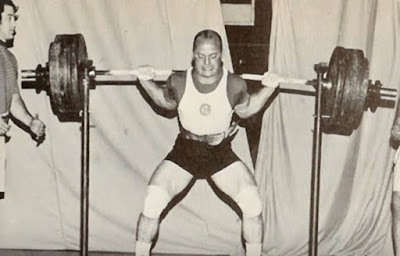 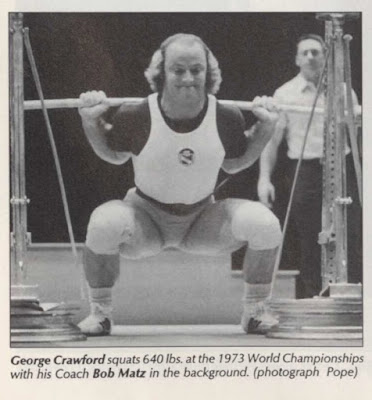 I remember the first time I saw George Crawford squat. It was in Circleville, Ohio, and I was the meet director. George was only 17 and he listed his starting squat at 410 in the lightweight class. This came as a big surprise to me, as a few weeks before I set the Ohio State record in this class with 365. This was in 1964. George now holds the American record in the middleweight class and won the 1971 World's Championship. If you ever get a chance to watch George lift you will see that he looks down throughout the entire squat. For George to keep his head up would certainly ruin his squatting position.

Hugh Cassidy, 1971 World's Champion in the super-heavyweight class, is another squatter who never looks up. More here:
http://ditillo2.blogspot.com/2018/09/1972-hugh-cassidy-power-squat-article.html

I think the idea of keeping the head up is a carry-over from the Olympic weightlifters. Let's remember, powerlifting is a different sport. In Olympic lifting, squatting is done as an exercise and all-out single attempts are rarely used. An exercise squat and a power squat are two completely different lifts and can compare in partial name only.

An Olympic squat is done in a more relaxed state, to simulate the bottom position of the squat clean. In the power squat, more attention is placed on head position, and staying tight on the way down. By that I mean keeping all the muscles of the back, hip, and legs tense so that you can descend into the parallel position slowly enough to have complete control of the weight.

Gary Hain, our team's best 123-pounder, has fine form in the squat. Gary has totaled 975 and squatted with 350. We were at a meet inside the walls of Pittsburgh prison. Gary started his squat with 335. I thought it was a little too high, but the judging was loose so it seemed a reasonable weight to start with. Gary came out, head down, hips back, perfect form but he just couldn't make it through the sticking point. He came out for his second attempt. Another miss. What now? We checked the barbell and found it loaded to 340 instead of the 335 he had called for, so Gary got his first attempt again. He squatted with it but was turned down for lack of depth. For his next try he had to get up with the weight as he was pretty well zapped at this point. I knew if he went into the low position in the squat, he would never get up. The object now was to stay tight. Hang it a little high and hope the referee and judges pass it. I felt by a slight change in the head position, Gary could hold the squat higher. He had to decide by the feel of the weight how low he could go and still get up with it. At this point he was to lift his head to stop his downward movement. It worked. He made the lift though sad to relate two officials turned it down. We learned a lot there about head position. Gary had bombed out of his first meet after 29 straight wins.

Gary has played a big part in our team compiling one of the finest powerlifting records in the nation. Since 1967 we have won 35 meets and lost three. Losing twice to the Surf Breakers from Barnegat, New Jersey, and once to Jim Williams' team from Scranton, Pennsylvania.

Later we will tell you the secret of all squatting . . .
How to Beat the Center of Gravity.