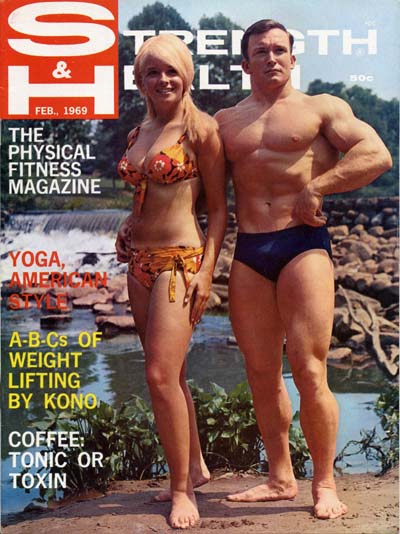 Taken From This Issue (February 1969)

If you've been following this  rejuvenation thing, you should be pretty well up on the first two of the four segments we're considering. The four segments, you'll remember, are:

We want to go on now and consider the next segment of the program -- vigorous social activity.

Some people get more social activity than others. Some get almost too much. My Uncle Harry is a good example. He phoned the other day and asked me to meet him for lunch. I got to the restaurant ahead of him. I was sipping a coffee when he walked in.

Uncle Harry is fifty-seven years old, but he looks thirty-five and he acts like eighteen. He started weight training about forty years ago. He figured he had a good thing going so he stayed with it. He bought a set of York weights way back when and he still uses them as faithfully as the day he got them.

He came through the door like gangbusters. He's about six feet tall, weighs two-ten and it's all muscle. He's got thick curly hair in a block cut, an eighteen inch neck,j and shoulders like Reg Park draped in a beautifully cut Nehru jacket. Every woman in the place sucked in her breath, and the cashier looked like she wanted to spring over the counter and molest him in the doorway.

He walked over humming "Black Day in July" and sat down. Three waitresses sprinted for the table.

"Uncle Harry," I said. "You're a constant source of amazement to me."

"That so?" he said. He turned and flashed a smile at the nearest waitress. She broke a sweat and dropped her pencil. "Just bring me some nice cold beer to start," he said.

Her mouth dropped open and I thought she was going to drool on his jacket.

She never even heard me.

Uncle Harry gave her my order. She looked at me like I was intruding.

Uncle Harry picked up the menu. "Well," he said. "What do you think? About two pounds of  nice rare steak?"

"For you" I said, "I'd suggest about five pounds of Mexican laughing grass."

The waitress flashed up to the table with two beers on a tray.

"Holy cow," I mustered. "She must know somebody at the brewery. Has the track coach heard about her?"

She plunked my beer down and some of it sloshed over the rim of the glass. She lowered Uncle Harry's in from of him like it was the Holy Grail.

He picked it up and sipped delicately. He turned to her and nodded approval. She took a deep, slow breath, lowered her eyelids, and darted her tongue across her lips.

"Uncle Harry," I said. "For goodness sake order something. I'm starting to feel like a peeping tom."

He picked up the menu and smiled at the waitress. "What would you recommend?" he said.

She leaned over and breathed on his ear. I thought she was going to bite it. Her voice dropped about three octaves. "The dinner steak," she whispered.

"Fine," he said. "We'll each have one, then." She stared into his eyes and her head weaved back and forth like a cobra getting ready to hit a rat.

"Rare," he added. She nodded approval and I began to think I'd come to the wrong restaurant.

She whispered in Uncle Harry's ear. He smiled pleasantly.

She turned and bumped her way to the kitchen like she was coming down the runway at the old Roxy theater. For a wild moment I thought I heard distant drums.

He yawned. "Said she's through at eight o'clock."

I stared at him in awe "Uncle Harry," I said. "You gotta be the greatest. Why do you bother with a slob like me?"

He sipped his beer. "I like your ideas," he said. "I'd like to hear more about that rejuvenation thing."

I choked on a mouthful of beer. (that fit nicely!) "Rejuvenation?" I said. "You gotta be kidding. If you get rejuvenated any more they'd lynch you."

"Uncle Harry," I said, "you do everything right already. You always did. You eat right. You train righ. How young do you want to get?"

"What about social activities?" he said.

I stared at him for a while and finally he got embarrassed.

"You said it was important,"he muttered.

"Listen, Uncle Harry," I said. "The kind of social activity I'm talking about your already do. I mean, swimming, for example."

"I know you do. The trick with swimming, of course, is to swim. I don't mean laying on the beach, or floating around on an inner tube. I mean swimming hard and vigorously until you're too tired to swim anymore.

"Energetic swimming in cold water is one of the greatest stimulants for your cardiovascular system. Get in a good session every time you're at the beach.

"Tennis is another good activity," I said. "You don't have to be a star at the game. Just get out on the court and move around a lot."

"I like tennis," Uncle Harry said. "And handball, too."

"Handball's good," I said. "So's hiking, if you've got mountain country to do it in. Or skin diving Or skiing, if you don't use the tow lift. Practically any outdoor recreation that involves a lot of leg work. They're all good for you and help keep you young."

The waitress brought our steaks. She fussed over Uncle Harry. She moved the salt and pepper closer to him. She brushed imaginary crumbs from the tablecloth. She did everything but run her fingers through his hair.

"Give her the cutlery," I said. "Maybe she'll cut your steak for you."

She gave me a cold look and flounced away.

"One of the best social activities," I said, "is dancing. Vigorous dancing."

Uncle Harry took a mouthful of steak. "I do a lot of dancing already."

"Listen," I said. "I've seen you dance and you oughta be ashamed of yourself."

"I don't mean shuffling around the snake pit with some broad young enough to be your granddaughter," I said. "I mean real live stuff. Polkas, square dancing, and do on.'

He looked at me like I was crazy. "Man," he said. "That bumpkin bit ain't really my bag, you know."

"I know," I said. "But it's great exercise. Lots of authorities recommend it."

He thought about it for a moment. "Course" he said, "Hoffman ain't really the swinger I am."

"Uncle Harry" I said. "Nobody's the swinger you are. But that type of dancing is still good for you."

He hacked away at his steak. "Where would I learn?"

He dropped his fork. "Take dancing lessons?" he said "You're outta your tree."

"No, I'm not," I said. "You asked me and I told you. Vigorous dancing is a good social activity if you want to stay I Am Stuck On Band-Aids And Band-Aids Stuck On Me young, and if you don't know how to do it, then a few lessons is the best way to find out."

We finished our lunch. The waitress was nowhere in sight. Uncle Harry handed her a bill. Her eyes glazed over and she punched three buttons before she got the cash register open.

Uncle Harry gave her a big smile. Her nostrils dilated and she crouched a little. You couldn't tell if she was going to curtsy or leap over the counter. I opened the door and pushed Uncle Harry out.

"Thanks for the lunch" I said. "You don't need any advice."

"I'm going to give the country dancing thing a whirl," he said. "You really think it's good, eh?"

"Great" he said. "I'll get started right away."

He peered through the restaurant window and then looked at his watch.