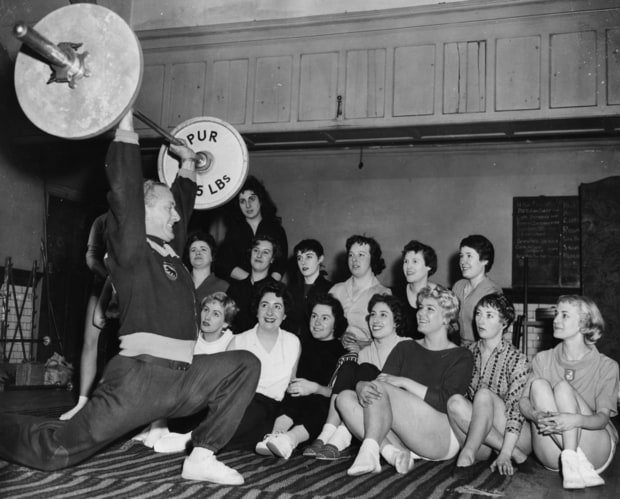 Al Murray, national weightlifting coach; born January 10, 1916, died September 27, 1998
His obituary in this newspaper will give you a small idea of what he accomplished and what he overcame along the way:
http://www.heraldscotland.com/news/12250160.Al_Murray/

Mr. Murray also coauthored a book with David Webster titled "The Two Hands Snatch" that can be found in its entirety on this blog.

Other books of his include
"The Theory and Practice of Olympic Weightlifting" (1955)
"Modern Weight-training: The Key to Physical Power" (1971)

And now to our article on The Press.
This is part of a series written by Mr. Murray, "The Olympic Lifts . . . And How To Train On Them" and we are able to read it here thanks to the efforts of  LIAM TWEED. 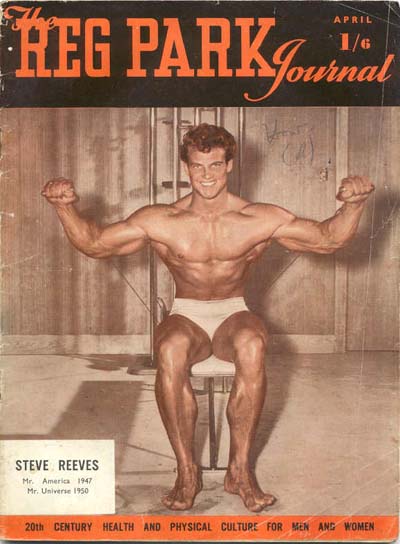 In competition there are seven classes: Bantamweight, Featherweight, Lightweight, Middleweight, Light-Heavyweight, Middle-Heavyweight, and Heavyweight. Three attempts are permitted on each of the three lifts, the best attempt on each of the these lifts is added together to form a total, the lifter with the highest total in each class being the winner. Every type of athletic quality is required to reach the top in this sport but these will be dealt with as they crop up. Let us start with . . .

The Press is believed to be a sheer feat of strength, but there is much more to it than strength. Correct positioning of the body during actual training and in competition can reduce the lifter's difficulties and increase his limit poundage.

In cleaning the bar to the chest much time and energy can be saved if one cultivates the correct method of cleaning a weight to the shoulders in preparation for the press itself. The feet should be placed approximately hip hip breadth apart with the bar touching the shins and over the insteps. The width of the grip is indeed important. This should be slightly wider than one's shoulder breadth so that when the bar is at the chest the upper arms are in line with the body and not facing forward against the front of the chest.

The grip can be either thumbless or with the thumb around the bar in the normal manner. Oscar State and myself went through over 100 photographs of lifters from all around the world and there seemed to be an equal number of top line pressers using the thumbless grip as there were using the normal grip.

Assuming that you have now gripped the bar in the correct position, your back should be straight but not vertical, shoulders slightly forward in front of the bar, head up and eyes looking to the front. This distributes the weight of the body evenly over the whole surface of the floor so that when your bar leaves the floor, center of gravity (or balance) will be traveling vertically upwards over the center of the base, i.e., insteps.

Use your legs and back in the pull as much as possible so that you may conserve the strength of your arms and shoulders for the press itself. As the bar slows down passing the chest, quickly dip at both knees, lowering the body to receive the bar on the chest at the exact position from which it will be pressed (see Figure 1 below for more instructional notes). 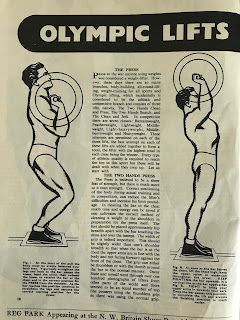 Now comes a very important part, that is positioning your body in the best balance and most powerful position for pressing.

The mechanics of this are simple - but seldom correctly observed. The lifter should aim to have the center of his bar as near as possible over his personal center of gravity (or balance) and these two points must be placed centrally over the lifter's base. The bar must also be in such a position that it can be pressed vertically overhead, still maintaining position over the center of your base. If the bar is held too high on the sternum the lifter will most probably be forced to swing the bar forward to clear the chin.  It is then a mechanical impossibility to keep the body still, in he correct position.
Once the bar has left the ground the body and barbell now become one mass with a common center of gravity. This is known as the combined center of gravity. In pressing the barbell forward from the chest two things can happen:
1) As the bar goes forward you may come on your toes, being pulled forward by the bar. This, by the way, is quite common and is a cause for disqualification.
2) This is more common, as the barbell travels upwards and forward, he head and shoulders are lowered backwards to counter balance the weight moving forward. The distance between shoulder joint and barbell is increased, making it harder for the muscles involved (see Figure 2 and its notes below). 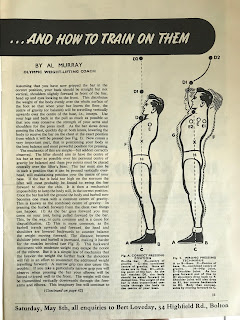 
This backward movement with moderate weight may escape the notice of the referee. But it is a simple law of mechanics that the heavier the weight the further back the shoulders will fall in an effort to counteract the additional weight traveling forward.

If you take a particularly narrow grip you will observe when pressing the bar that your elbows will be forced to travel well to the front. The weight will then be transmitted vertically downwards through the forearms and elbows. This imaginary line will continue to fall downwards in front of the toes. The shoulders in consequence will be forced backwards and hence the reason for the success of the more modern wide grip.

A related and interesting pair of articles with Press grip widths discussed in parts, by Bob Hoffman:
http://ditillo2.blogspot.ca/2008/04/military-pressing-1937-and-1944-bob.html

When the wide grip is used you will note that whilst pressing from the chest, the bar, elbows, hip joints and insteps are more or less in one vertical line. This is a strong and economical pressing technique.