My Secret for Developing My Deltoids
by Reg Park (1965)

Exceptionally well-developed deltoids are the hallmark of a great physique. How many top notch bodybuilders have truly great deltoids? The names of Grimek and Melvin Wells immediately spring to my mind, but then you have to start thinking to come up with other names. Neither Grimek nor Wells had exceptionally broad clavicles, but when they stand lined up, their deltoid development stands out. And when they begin to pose, the other contestants might as well go home.

It is because of the foregoing reasons that I have always favored deltoid work, and I would like to relate the type of exercises I have performed for my own shoulders throughout the past few years.

When I started training in September of 1948, the methods of training were not as far advanced or as scientific as they are today, so you must not be surprised when I tell you that the first deltoid exercise I performed was the "press on back on floor," because I did not know about the bench press in those days. I also performed the regular standing press, and the straight arm pullover on floor with barbell, and each exercise was done with three sets and repeated 10 repetitions.

By 1949 I had read almost every book and magazine that was published on bodybuilding that I could lay my hands on. At that time all my workouts started with deltoid exercises, such was the importance I placed on this muscle group. My workout consisted of the following:

I always performed my chest exercises immediately after working my shoulders because of the additional benefits the deltoids received from these exercises. Later in that year of 1949 I met Reub Martin (for the first time) who was then touring England in those days with the Folies Bergere, in which his act, the Trois de Milles, was being featured. 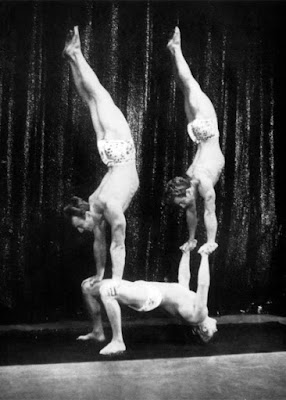 From Reub I learned the value of the handstand press-up and the pressing of dumbbells simultaneously. As a matter of fact it was while in Reub's dressing room that I first cleaned and pressed a pair of 100 lb. dumbbells, a feat of which I was very proud. Subsequently, my deltoid training revolved around:

Chest exercises invariably followed the deltoid exercises mentioned above. I was never what I would personally classify as "naturally strong," because I had to use all my willpower in training in an endeavor to handle heavier poundages. I also employed the stabilizing principle, i.e., using five sets of five repetitions, with the first two sets being warmups and the final three sets of five repetitions with heavier weights.

On the other hand, I have met others who had strong constitutions and who were able to handle heavy poundages more easily, but I had to train hard to increase any strength. And knowing how keen MD readers are on poundages, I am, therefore, listing some of the weights I used in my training up until 1958:

Recently, because of having less time to train due to the pressure of business, I have given more thought to my training than ever before. Because I am now satisfied with my pectoral development, I no longer do any chest exercises, other than 5 single repetitions on the bench press to retain my muscular tone. Since I consider the press behind neck the best all-round exercise, I not only do it standing  five sets of five repetitions, but I also do 5 sets of eight reps while sitting on a bench. Bentover lateral raise with dumbbells or parallel bar dips always follow this pressing exercise and are employed to develop the rear portion of the deltoids, using five sets of eight repetitions to complete my shoulder routine:

The poundages I handle are usually:

I feel I should also include the side lateral raise with dumbbells, but time does not permit me except on rare occasions to do this exercise.

I also perform back exercises after my deltoid workout. The first exercise is usually the chin behind neck. I feel confident that this exercise also benefits my rear deltoids. I also feel it helps to keep my shoulders supple and allows me better control of my clavicles and shoulder structure when posing. Also, at the present time I no longer do willpower, strength/bodybuilding training.

The poundages listed above are performed almost completely with muscle strength, and strangely enough, I seem to realize even greater muscle response from this type of training than I experienced when handling much heavier weights. MD readers might also like to try this method for greater muscular improvement. 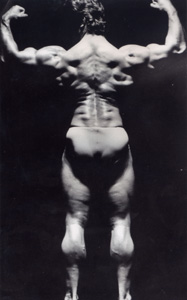