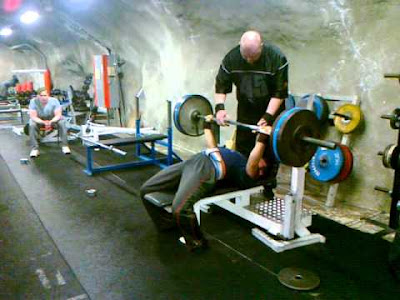 Out of the three contested powerlifts, none enjoys more popularity than the Bench Press. Indeed, if one were to wander into any local YMCA or college weight room, odds are (for you bookie types out there) that the bench pressing area will be heavily congested while the squat rack or situp boards will resemble the Gobi desert, renowned for its vast emptiness.

The love affair that the novice and advanced weight trainee has had with this lift probably began during the days of Marvin Eder. For those of you who think that the Bench begins and ends with such current superstars as Bridges, Kaz, Arcidi and MacDonald, try this one on: Eder (bodyweight 195) was able to push up in strict fashion 495 pounds and do Dips with well over 200 pounds of added weight. Big deal, you say, but remember, this was done in the mid-50s without the advanced 'supplements' available today. Photos of Eder show a tremendous pec-delt-triceps tie, which was the result of heavy benching.

Historically speaking, bench pressing didn't really come into its own until after World War II when commercially constructed benches as we know them were available to the general public. Before then, lifters resorted to all manner of exotic gyrations to get the weight on their chest, or simple stuck with dumbbells.

Easing into the recent era, Paul Anderson was reputedly capable of a 620 Bench Press (source: Guinness Book of Records) done in the early Sixties, but by then he had lost his amateur status so the records never counted.

Pat Casey was the first to officially do 600 pounds, and the standards he set have still only been matched by extremely few lifters.

Ronnie Ray came out as a relative unknown from Texas and rode the crest of his massive Bench at 198 to win a Senior National Title.

The point here is that we can all take a page out of the training logs of these giants of yesteryear to improve our own bench pressing. Al Oerter (4 time gold medalist in the discus) was quoted by the L.A. Times as saying, "If these guys (track athletes) thought that eating Brillo pads and stadium seats would improve their performance, they would do it." So it is with the bench press. There are literally many, many thousands of dollars spent each year by lifters on drugs and exotic new equipment, merely in pursuit of the elusive 'max'. I submit that the intelligent application of well-established theory (not to mention years of hard work) will garner excellent (and permanent) gains.

Ronnie Ray was the prototypical bench presser: short, thick arms, a deep chest, and fairly broad shoulders. Regardless of his structural advantages, he trained the bench as if it was a weakness. How about 30-second pauses with 405, or 20 sets of 10 in the pushdown with 200 pounds, supersetted with heavy dumbbell curls! Ronnie loved to work the bench under seemingly ridiculous constraints (long pauses, feet up in the air, etc.) The idea here was, of course, to make the contest single seem much easier to perform than a regular training lift. He performed anywhere from 15 to 20 sets of benches, twice per week. I sincerely believe that performance of the long (3-5 second) pauses will condition the motor pathways to the point that a standard contest pause will make you feel like you're cheating!

Heavy Dips with weight have long been considered by weight trainees as a number one assistance exercise for benches. Eder, as previously stated, could do full dips with well over 200 pounds. Pat Casey would do reps with 300 pounds AND he weighed over 300 himself! Once a year, Pat would 'test' himself on the dip by attempting to do 200 reps with bodyweight plus about 200 added pounds. He would start by doing 5-10 reps and continue with single reps until he completed the 200 total. He would take as long as seven hours to complete this marathon workout and would be sore for three weeks or so afterwards, but he claimed that this extreme effort did help bring his lift up to 617.

The Finnish Superman, Hannu Saarelainen (photo at top of article), depends heavily on weighted dips to develop the initial and finishing kick on his bench. This movement has, however, seen some injuries. Lou Paul, one of the early Muscle Beach lifters, totally blew out his pec while performing heavy weighted dips. His bench deteriorated from 400 in the early 60s to less than 200 today. It is not known if Lou gave immediate attention to his injury or not, however.

Many super benchers dip but do unheard of reps instead of massive weights to augment their benches. I know a lot of you have never heard of Bill Patze, but he was able to do a 370 officially at 148 and at a bulked up 170 managed to push up a strict 440 in the gym. All of these lifts were done in the early '70s in Arizona with no steroid or shirt use whatsoever. Bill was also a super gymnast, and his specialty was the still rings. To aid his performance on the rings, Bill would come home from high school and do 5 sets of 100 dips with bodyweight AFTER gymnastics practice. Four years of continuous dips (let's see now, that is approximately 730,000 dips over the course of his high school career!) made bench pressing seem relatively harmless.

No article on bench pressing would be complete without mention of the Black Bear of powerlifting, Jim Williams. Jim spent years building a Gibraltar-like foundation which he refined in his competitive dys to an eventual 675, done officially, and the famous 700 pound bench done in front of reliable witnesses at the York Gym. Jim favored low, and I mean low reps, usually no more than 21 per workout. His reasoning was twofold: first, he had spent many years on basic exercises such as heavy pullovers, front raises with a 100-lb. plate, and heavy dumbbell bench work, so he did not need any more assistance work. Second, and more important, was the fact that he wanted to save that precious energy for the heaviest lift. By using these principles, he was able to bench 4-6 days a week and knock off some gargantuan poundages.

At that time, Jim was training with John Kuc, and together they devised a method forced reps which moved John's bench from the mid 4's to an official 605. After the normal sets and reps were done, Jim and John would load on anywhere from 50-100 pounds over the top weight of the day. Then, forced rep benches would be done with equal emphasis on the negative, or eccentric, movement as well as a total effort on the part of the bencher to complete the lift..

About 10 years ago, Ken Leistner wrote a very fine article on bench pressing in Iron Man magazine, which dealt with this forced rep system. It, like Pat Casey's marathon dip sessions, will cause extreme soreness even for the most advanced lifter and should not be overdone.

Bill Ennis and his training partners came up with a 'new' twist to an old idea, namely using elbow wraps in training to "overload" in the bench press. Here again, the idea is to stress receptor conditioning, much like heavy box squats for the legs. The lifter would put on the wraps after his heaviest bench and in most cases would be able to push up 30-40 pounds more than his max. Bill, who had reportedly peaked out in the bench press at around 500, is now knocking on the door of 520-525 (with the wraps he was able to push 575). Again, this should be done only a few weeks out of the year.

As always, necessity was the mother of invention back then, just as it is now.