There's an old saying that goes, "There's more than one way to skin a cat, and it certainly holds true for bodybuilding. In the art, sport, and science of building and refining muscle, there are many different methods -- that is, exercise routines -- that you can use to reach your optimum development.

Keep in mind, however, that the lifters who prefer the "10 sets of 10 reps and 10 Dianabol" approach don't build healthy, lasting muscle. They stop working out for two weeks, and lose 15 to 20 pounds.

The following chest training programs, on the other hand, are surefire result producers. They are the workouts used by three great bodybuilders -- Mr. Western America Bill McArdle, IFBB Mr. America Freddy Ortiz, and seven-time Mr. Olympia Arnold Schwarzenegger. These men all had very different bone structures, temperaments and metabolisms, yet each developed a fantastic chest -- a perfect combination of size, shape, and cuts, with a deep rib cage and fully developed pecs. In fact, these champions sculpted such magnificent upper bodies that even the great statues of the ancient Greek gods pale in comparison.

If you've reached the intermediate stage of training or further, you're ready to start specializing too. One of these three routines may well be just what you need to achieve your goal.

Those of you who weren't involved in bodybuilding in the 1960s probably never heard of Bill McArdle. He first came to Southern California in 1965 and trained at Vince's Gym in Studio City, where he became close friends and then training partners with Larry Scott. Bill weighed 225 pounds and had a 52 inch chest at that time, but he won most of his titles at a bodyweight of 208. He possessed one of the most symmetrical physiques of all time -- sort of a Frank Zane type with 25 pounds more muscle and dazzling definition.

Bill was a personal trainer and instructor in several gyms and health clubs. I trained with him on a number of occasions and was highly impressed with his intelligent approach. He was one of the first bodybuilders to promote the idea of doing all the pulling exercises -- like lat pulldowns, curls, flyes and side raises -- on one day, and all the pushing movements -- like presses, bench presses and triceps extensions -- on the next. It worked great for him.

I often refer to Bill as the "uncrowned Mr. America" because I believe that he would have won that title one particular year except that he lost 17 pounds of muscle during the last week before the contest -- and still placed second! If he had concentrated solely on bodybuilding instead of his career as an artist, he could have become Mr. Universe. Ask Larry Scott or Vince Gironda if you don't believe me.

Here are the exercises and workouts that helped Bill McArdle build his great chest. The intermediate program was part of a six-days-a-week routine. When he was using it, Bill worked chest, deltoids and triceps on Monday/Wednesday/Friday; on Tuesday/Thursday/Saturday he trained thighs, lats and biceps, as well as getting in another round of midsection work. If you'd seen Freddy in his prime, you'd never forget him. His upper body was awesome to the max! At a height of 5'5" and weighing 193 pounds with a 28-inch waist, he had arms that taped at 19.5 inches cold and a full chest that measured 50.25 inches. In other words, Freddy was freaky.

Ortiz came to California in 1967, and he, too, trained at Vince's Gym. They called him "the Freeway Kid." I took some photos of him for Muscular Development and Muscle Builder magazines and worked out with him on numerous occasions.

Freddie used to come over to my pad in Studio City and drive the landlord crazy when he'd dive off the balcony into the swimming pool. "It's nothing," Freddie would say. "I dive off the 23rd Street Pier in New York all the time, and that's 80 feet!"

Freddie was famous for his fabulous arms, but his whole torso was outstanding. His chest was magnificent -- great pecs combined with a deep, ruggedly contoured rib cage. He was strong, too, banging out sets and reps with 350 in the bench press.

"I never overtrain," Ortiz told me once. "I can't do 10 sets of 10 reps on every exercise like some of these steroid guys claim they can do. When my muscles are thoroughly pumped, I move to another muscle group. Why try to whip a dead horse?"

Here's an adaptation of Freddie's favorite chest-training program. If you're a beginner with less than six months of solid training under your belt, do two sets of each exercise. If you've been training long enough, do the workout as written. If you're up to it, you can also try supersetting the first two and the last two exercises.

The following is the routine that Freddie used to build massive, shapely pecs and a deep, impressive rib box when specializing on his chest. Perform all movements in strict form while using the heaviest poundages possible for the reps. Gradually decrease your rest time between sets to no more than 60 seconds. 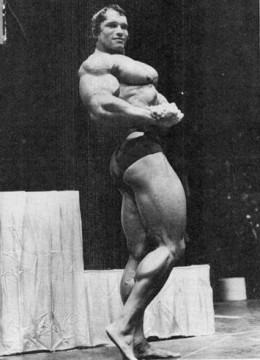 No article on chest training would be complete without a discussion of the great Arnold Schwarzenegger's approach. Arnold had the unbeatable combination of a deep, perfectly formed rib cage and massive, fully developed pecs that rippled with cuts and striations.

I remember training with him at Vince's Gym one time when Vince asked me, "Why are you spending so much time on the bench press? It's not that great a chest exercise."

"Vince," I replied, "look at Arnold's chest. It measures 58 inches. He must be doing something right."

Gironda believed that more isolated movements work the pecs better, while Arnold liked to do heavy bench presses and incline presses along with the isolation movements. Arnold's training did -- and still does -- combine the best of both worlds.

Arnold's favorite chest exercise, as you may have guessed, was the bench press. We'd start off with a light warmup set of 20 reps and follow that with sets of 15, 10, 8, 6, and 5, adding weight on each set. Arnold sometimes worked up to 440 pounds for reps. He preferred to do his incline presses with a barbell, using a wide grip. Periodically, he'd start his workout with that movement and do the bench press afterward. Whichever he started with got the weight progression and sequence described above, and then he performed the second exercise for sets of 10 to 12 reps. Here's one of Arnold's favorite chest programs.


When we were working out together, Arnold trained six days a week, and he worked each muscle group three times a week. He had a unique way of doing flat bench flyes that he credits with developing the outsides of his pecs. He performed them with his arms slightly bent to keep the stress off his elbows, which everyone does nowadays, and kept the movement wide. He didn't bang the dumbbells together but rather stopped at a point where they were 10 to 12 inches apart. This kept the tension on his pecs, particularly the outer portions, throughout the exercise.

I used a variation of Arnold's technique, doing one full rep, touching the dumbbells at the top, and one three-quarter rep, as described above, for a total of 6 reps each way per set. This gives you a great pec shaper, as well as adding mass to the outer portions.

On occasion Arnold and I would superset bench presses with chins and incline presses with pullovers. He did this mostly before a contest or posing exhibition.

Here's another chest specialization program that Arnold made great progress on. It's very advanced, and if you decide to try it I suggest that you gradually work up to the full routine.

According to Arnold, beginners shouldn't try to specialize on any muscle group until they have trained on a basic all-around program for 6 to 12 months. Once they've gained some muscular weight and size, they can give more attention to muscle groups that seem to be lagging behind.

For intermediate lifters Arnold suggested a variation of the first program listed above, as follows.

Even though Arnold and I trained together for only a few weeks, I learned a great deal about chest training from him. We worked out hard and fast, and frequently we were joined by Charles Fautz, who won the IFBB Mr. America Tall class. When Arnold and Charlie started banging out reps with 400-plus on the bench press, I had to reduce the poundage for myself. Arnold said, "Gene, always work within your capacity. Don't try to do as many sets as I do if it is too much for you. Do the best that you can do. Make every rep of every set count by concentrating all of your attention on the muscle you're working."