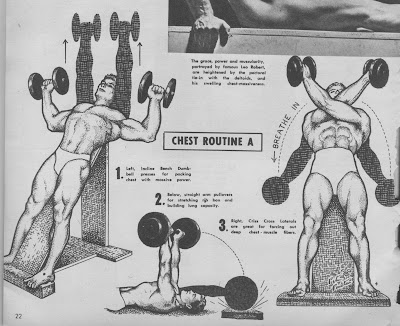 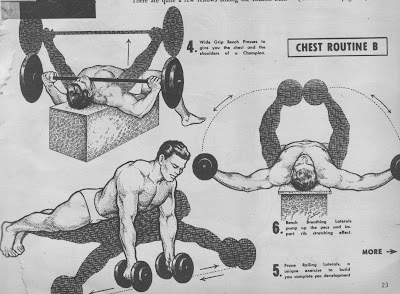 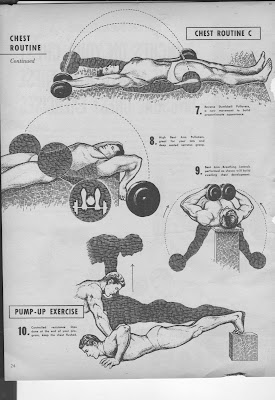 You can make an excellent comparison of the physiques of modern bodybuilders and the strength athletes of forty and more years ago by leafing through a copy of Muscle Power and that classic work of the weight world "The Kings of Strength" by the late Professor Desbonnet. Place a picture of any recent Mr. America winner alongside a muscular model from Desbonnet's book, and you at once notice a very salient fact . . . that the modern physique star has it all over the old timer when it comes to chest muscle development.

There are quite a few fellows among the muscle men of yesteryear who can qualify as outstanding physical specimens, included among them brothers Bobby Pandour, Staff Sergeant Moss, Otto Arco and Eugen Sandow. Yet not one of these admitted "greats" had a chest development that could compare with any Mr. America crowned during the past eight years [1948-55]. You have only to look at the pictures to satisfy yourself of the soundness of my contention.

It is of course true that the men who in many respects most closely approached the modern concept of ideal chest measurement were Staff Sergeant Moss, Bobby Pandour, and Otto Arco. But be it noted that these were all skilled gymnasts, polished performers on Roman Rings, Parallel Bars and the High Bar. Those who have used these pieces of apparatus in high school or college know just how much the muscles of the chest, arms and shoulders work in concert in activity connected with them.

The modern trend to greater chest muscularity has undoubtedly come about as the result of greater, more intense specialization. Yet that specialization has been made possible only because of new types of equipment; these have enabled the bodybuilder to make use of movements which directly affect the muscles of the chest. George Eiferman, Steve Reeves, Jack Delinger, Clancy Ross, Marvin Eder, Leroy Colbert, etc. Devotees of Flat and Incline Benches will, I am sure, support my statement and furnish visible proof in their own musculature.

The exercises possible on Flat and Incline Benches work the muscles of the chest completely through the function for which they were introduced . . . as adductors of the arms . . . groups which pull the arms from any "away" position, into and across the chest. But the most important fact is that not only do these benches allow performance of chest exercises in a more efficient manner, they also increase the number of exercises and variations. And there is an added benefit. The movements provide physical improvements, but also mental stimulation, a quality enabling a bodybuilder to retain and increase his enthusiasm, train harder, and thus build up his strength and measurements faster than ever before.

But even fifty years ago, there were exercises that provided a measure of chest muscle development, foremost among them the pullover and press on back, with or without a bridge. Yet this movement was never sufficient in itself to provide outstanding pectoral and rib box development, since the muscles did not get a complete workout. As a consequence, the mighty men of those times never quite reached the maximum possible development of the chest.

Every piece of string has two ends. Just as the old timers were comparatively deficient in chest muscle, so there are some present day bodybuilders who work their "pecs" to a fare-thee-well. It should be the aim of every bodybuilder to build a proportionate development, and this can best be done by learning as much as possible about the science of bodybuilding . . . about muscle function and internal organs, about food and rest. Take for instance the way a muscle works. The more you know about this phase of bodybuilding, the better you will understand why certain exercises must be used. If you know what action a muscle performs, then you automatically know what are the best exercises to give it a proportionate, muscular appearance.

Let's look at the chest, or pectoral muscles. The first thing to learn is that it is not a single muscle but two.  Just as the deltoid muscle has three separate heads so the pectoral muscle has two sections, each with its own function. The smaller portion of the muscle, the Pectoralis Minor, is located on the front of the upper chest, covered by the Pectoralis Major. This section is important because it not only draws your shoulder blade forward and down, and helps rotate it, but it is also an important breathing muscle. The pectoralis minor works with great vigor in all, deep, forced breathing, but not, note - not ordinary breathing.

If you want to feel this muscle at work, get your buddy to hold his arms close to the sides and pull them slightly back. Place your fingers near the top of the big chest muscle, then have him take a deep breath at the same time lifting his shoulders. You'll feel the muscle working as it lifts the big "pec" covering it.

If you want your partner to help you test the muscle function, have him hold his arms out straight at the shoulders and press his hands firmly together. Both upper and lower sections of the pecs will stand out in bold relief. Press down on his arms, while he resists. The lower part of the pec will relax, the upper part wil contract. Press up on his arms while he resists and the upper half wil relax while the bottom contracts.

A well designed pectoral specialization program will develop larger chest muscles, but it will, if the exercises are used correctly, help to build a larger rib box as well. For this reason, special attention must be paid to breathing in the exercises where indicated, so that the rib box gets a chance to increase in size and capacity.

Here are the exercises. I'll explain how they are to be used after I've described them. Notice that they are divided into three separate routines, with a final movement to pump up.

Exercise 1 - Incline Bench Dumbbell Presses.
Lie on an incline bench, a dumbbell held in each hand. Palms of the hands should face forward. The dumbbells must be presses steadily to arms' length, then lowered down steadily so the upper arms come straight down to shoulder level position, and then down to the sides of the body for the stretch. (See Illustrations for fuller explanation of the exercises.)

Exercise 2 - Straight Arm Pullover.
Lie on the floor with a barbell held at arms' length above your chest. Throughout this movement your arms must be kept straight, locked at the elbows. Lower the barbell straight down to the floor behind your head, taking in a deep breath as you do so. Raise to commencing position again and repeat. it is most important that you force the air out of your lungs as you raise the barbell. You can place a pad behind your head to get a slight rebound of the bar.

Exercise 3 - Criss-Cross Laterals on Incline Bench.
Lie along the slope of the bench with a dumbbell held in each hand, arms stretched out and down to the sides, as shown in the shadowed outline in drawing number three. From this position raise the dumbbells up to arms' length, crossing your arms straight and locked at the elbows. Lower the dumbbells down to commencing position breathing in deeply as you do so, forcing that air into the lungs. Breathe out as you raise the dumbbells up to criss-cross position.

Exercise 4 - Wide Grip Bench Press to Neck.
Lie on an exercise bench, a barbell held at arms' length above your chest, collar-to-collar grip. Lower the weight down steadily to the base of your throat, then press to arms' length again and repeat. Don't try to speed up the exercise, instead concentrate on its form and use as rhythmic a motion as possible.

Exercise 5 - Prone Rolling Laterals.
Here's an unusual exercise which is all pure pectoral work in its final stages. Loosen the collars sufficiently away from the plates on two dumbbells so the plates roll around the bars easily. Place the dumbbells as in Illustration 5, hands gripping the bars firmly. Push the dumbbells out to the sides, but take care not to go too far out at first. When you feel you are as low as you dare go, pull the dumbbells in and back to starting position and repeat. Whatever you do, don't bend those arms of yours but keep them straight, locked at the elbows throughout the exercise.

Exercise 6 - Breathing Bench Laterals.
Lie on an exercise bench, a dumbbell held in each hand at arms' length above the chest, palms of the hands facing in, arms just slightly bent at the elbows. Lower the dumbbells down and out to the sides, and as you do so take as deep a breath as possible, reaching a peak of intake from when your arms and the bells are level with the bench. Breathe out and return to the commencing position and repeat. Remember, it's important that you force the air into your lungs as you breathe in, and force it out as the dumbbells return to commencing position.

Exercise 7 - Reverse Dumbbell Pullovers.
Here's one of the finest exercises for complete pec development. It gets the lats too. Lie on the floor with a dumbbell held in each hand. One arm should be stretched straight out above the head, the other resting alongside the body. Raise both dumbbells at the same time, one moving from the body to above the head, the other moving from above the head to alongside the body. Thus each dumbbell, as you will see from illustration 7, moves through half a circle. Breathe as deeply as possible, reaching peak of intake as the dumbbells meet at arms' length above the chest, breathing out as they both travel down to the floor.

Exercise 8 - High Bent-Arm Pullovers.
Lie on an exercise bench with a barbell resting across the top of your hips, hands gripping the bar with a shoulder width spacing. Push the bar up over the chest and face, to down behind the head. Breathe in deeply as the rib box takes the stretch effect of the barbell behind the head. Breathe out as you raise it back to commencing position. When you do this, make sure the bar travels high above the face and body, down to the hips.

Exercise 9 - Bent-Arm Breathing Laterals.
Rest a pair of heavy dumbbells on your chest, arms bent as shown in Illustration 9. Keeping the arms bent, lower the dumbbells down and out to the sides, breathing in deeply as you lower the bells, forcing the air into your lungs. Raise to commencing position, breathing out forcibly, and repeat.

Pump Up Exercise - Controlled Resistance Floor Dips.
Take up the floor dipping (pushup) position with your feet resting on a box, your training partner's hands resting in the middle of your upper back. Press up to locked arm position. Your partner should apply enough resistance so you are just able to keep moving. He keeps this up, resisting as you push up, until the required number of repetitions have been performed.

For the first week of your chest specialization routine, use Routine A, handling as heavy a weight as possible, performing 3 sets of 8 reps each exercise. The second week, switch to Routine B, handling as heavy a weight as you can manage, again using 3 sets of 8 reps. The third week use Routine c, the same set and repetition combination as in the other routines, and again using all the weight you can handle. The fourth week, use every exercise in all three routines . . . 9 exercises in all, 2 sets of 8 repetitions each exercise.

At the end of each workout, finish up with the Controlled Resistance Floor Dips, forcing out as many repetitions as you can.

Train four days weekly, performing the chest program first, then using the exercises for the other muscle groups you choose to work on those days.