Chapter 8 -
Weightlifting: Mind Over Matter
Some great stuff from Russ Knipp, David Rigert and others.
https://archive.org/details/TheSuperMentalTrainingBook 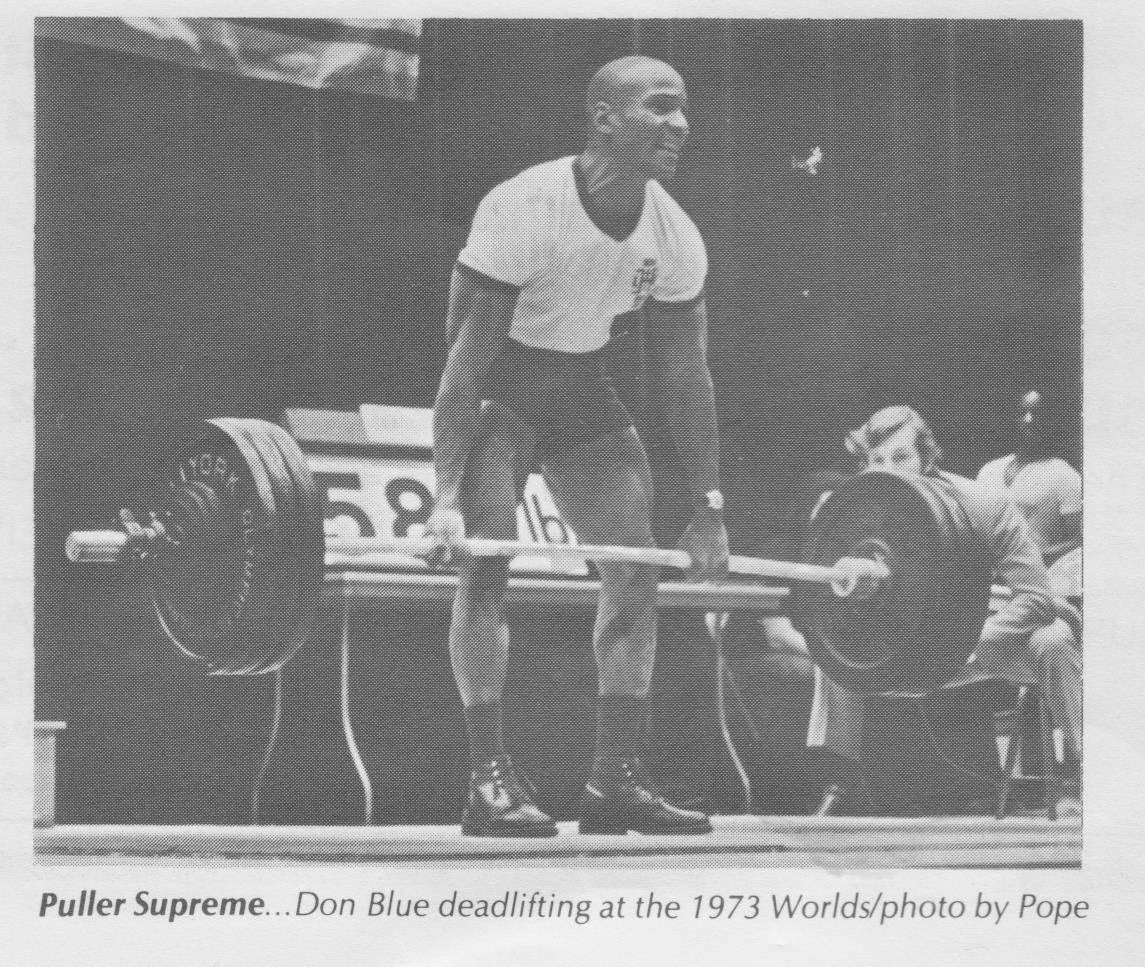 Don Blue, one of the all time powerlifting greats sagely observed that the contest doesn't begin until the weight hits the floor. He, of course, was a brilliant exponent of his own theories as he pulled a multitude of world records in the deadlift and was the official World champion in the tough 148-lb class at the 1973 Worlds. It is truly a shame that the man has spent so many of his competitive years incarcerated, training under the conditions that he had to endure. Who knows what he could have done with the proper diet, medical supervision, equipment and accessories.

This article is a companion to a similar study that I made on championship squatting techniques some time ago. Although the focus of the article is not about Don Blue, many of his theories will explored in depth. The deadlift, unlike the bench press and especially the squat, is a lift where so-called 'artificial aids' (wraps, tight suits, etc.) do not necessarily help. If you look at most of the champion deadlifters, few, if any wear knee wraps or a super-tight squatting suit. The incomparable John Kuc often pulled his deadlifts without a lifting belt, except when he neared World Records-Ville, and then he would put on a standard Olympic lifter's belt and go to it. I truly feel that the deadlift is a good test of total body strength, but due to its apparent simplicity, technique is often overlooked for pure psyche and emotion.

Again, technique is a byproduct of body structure, whether favorable or not -- and consistent application of proven approaches. Quite naturally, one can not change bodily structure for the deadlift (besides, I think that they made the 'rack' illegal back in the Dark Ages). One simply is structurally blessed or is not. That should not be used as an excuse for slacking off on deadlift training.

If you are built like Lamar Gant or Vince Anello -- fine --  the only thing that should concern you is overtraining the lift because of its relative ease for you vis-a-vis squatting and benching. Terry McCormick, John Cole, Walter Thomas, Larry Kidney and Bill Kazmaier are all 800-plus pullers who also happen to be 500-plus benchers as well. I doubt if they would consider themselves 'structurally blessed' for the deadlift. One common denominator of these men is their fierce attention to detail and technique. 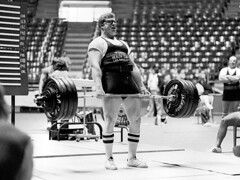 Terry McCormick has one of the most awesome pulls in powerlifting. His approach to the deadlift, like it is for the other two lifts, is precise and methodical. If one were to analyze his lifts, they would be astounded by the slowness of ascent. In his own words, Terry analyzes his lifting style: 'A lot of guys try to rip the weight off the floor thinking that the momentum will carry them to completion. What usually happens is that the weight slows down after it passes the knee cap and the lift is lost. I try to really stay tight at the bottom, pushing my stomach against my belt and deliberately squeezing the weight off the floor. As it passes my knee cap, I accelerate and lock out.'

Contrast this to the system of Jon Cole who emphasized extreme explosiveness all three of the lifts. Jon was so inhumanly strong in his prime that he would literally rip the weight off the floor, but he would sometimes end up hitching at the top due to a lack of acceleration.

Walter Thomas, Mike Bridges, Veli Kumpuniemi and Bennet Clayton are all excellent exponents of the sumo-style deadlift. Actually, there are two distinct sumo styles, best described as 'fists in' (an extremely wide stance like Kumpuniemi and Bridges where the 'stroke' is shorter and the hands usually wind up between the legs), or the 'fists out' (a more moderate stance like Walter Thomas and his wife Juli use, where the hands wind up either outside the thighs or on top of them after the pull). To Sumo or not to Sumo is a question that probably has plagued lifters for a while, because for certain body types it can be an extremely efficient lift. I can quote Rickey Dale Crain (another fine puller) on this rationale: 'Generally a good hip and thigh (wider stance) squatter will be a good sumo stylist.'

Keep in mind that the sumo is very taxing on the adductors (inner thigh muscles) and that the start will be very slow. Bridges claims that the deadlift done in the sumo manner is nothing more than a 'squat with the weight in your hands rather than on your back.'

Historically the deadlift was the last of the three original powerlifts to be instituted - the bench press and the squat being the first (the deadlift actually replaced the standing curl as a lift!). Olympic lifters were (and still are) very good deadlifters largely because of the near-perfect body position they need to employ at the outset of a heavy clean or snatch. York Barbell Club members such as Ernie Pickett, Bill Starr and Tommy Suggs were very successful in powerlifting meets in the early sixties. In fact, Bill Starr pulled a record 666.5 (198 lb class) at the 1968 Seniors in Los Angeles and managed to beat a lot of powerlifting 'purists' in the same weight class. Some very common training methods of the day were the old 5-4-3-2-1 system where the lifter would pyramid to the 'apex' of the pyramid and stop. Power cleans were done as well as power snatches and high pulls (the basis of Starr's methods) for assistance work. Then, as well as today, the deadlift was worked but once per week (Jon Cole recommended once every other week to once per month for very advanced lifters).

Some other notable pullers of the day were Gary Young (742 at 242 - 1967), Bill Burtis (615 at 165 - 1968), and of course Wilbur Miller, Felix Gomes, Don Cundy and Con Blue. Don Blue -- he would easily make an entire cover story for PLUSA but information about him is very sketchy -- used the weights as an antidote to the frustration, loneliness and sheer hell that presides within prison. He did not have access to a luxuriously equipped gym; in fact, it had but 360 pounds of weights along with a rusty bar and bench. When the 360 began to get too easy for singles, and even reps (would you believe 40 reps some days!), he scrounged an old Coke crate which he stood on and made the lift harder. Don used this training method -- which is probably the 'prototype' of Jaska Parviainen's Finnish system to set some astounding world records in the 148 lb class. I believe he pulled around 622. 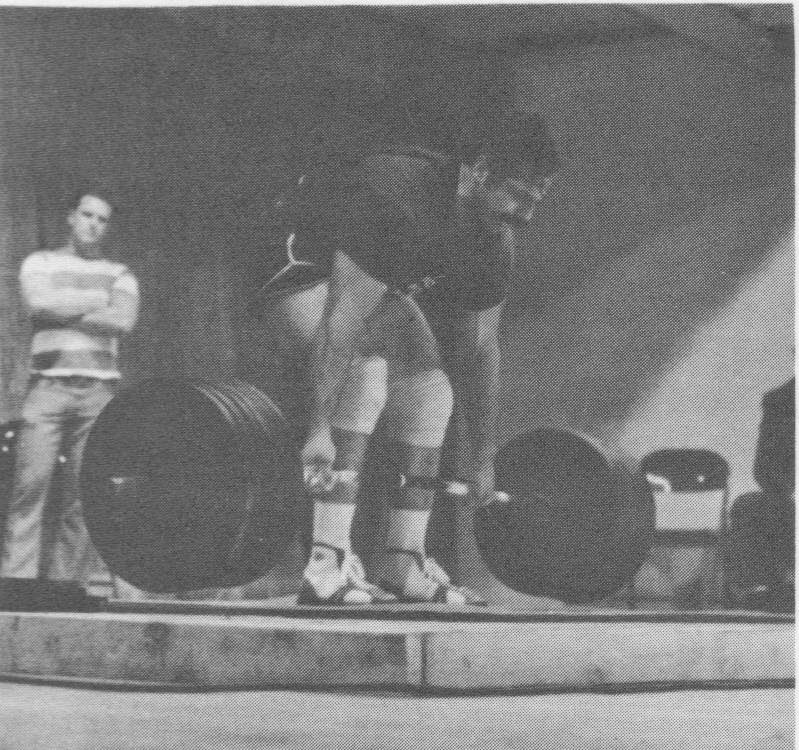 George Frenn has come up with his own high-rep/intensity system. "If you work the muscle groups involved with power cleans, snatch grip hi-pulls and good mornings, one only needs to deadlift once per week. That day should consist of a few warmup sets and then an all out set of 10 reps. You can take the 10-rep sets and translate them into a limit deadlift."

Today's training methods are largely on the cycle system with more shorter-range movements used as assistance work (rack lockouts, for instance), and much more emphasis on bodybuilding -- working the lat muscles as a 'hinge' to assist the deadlift. 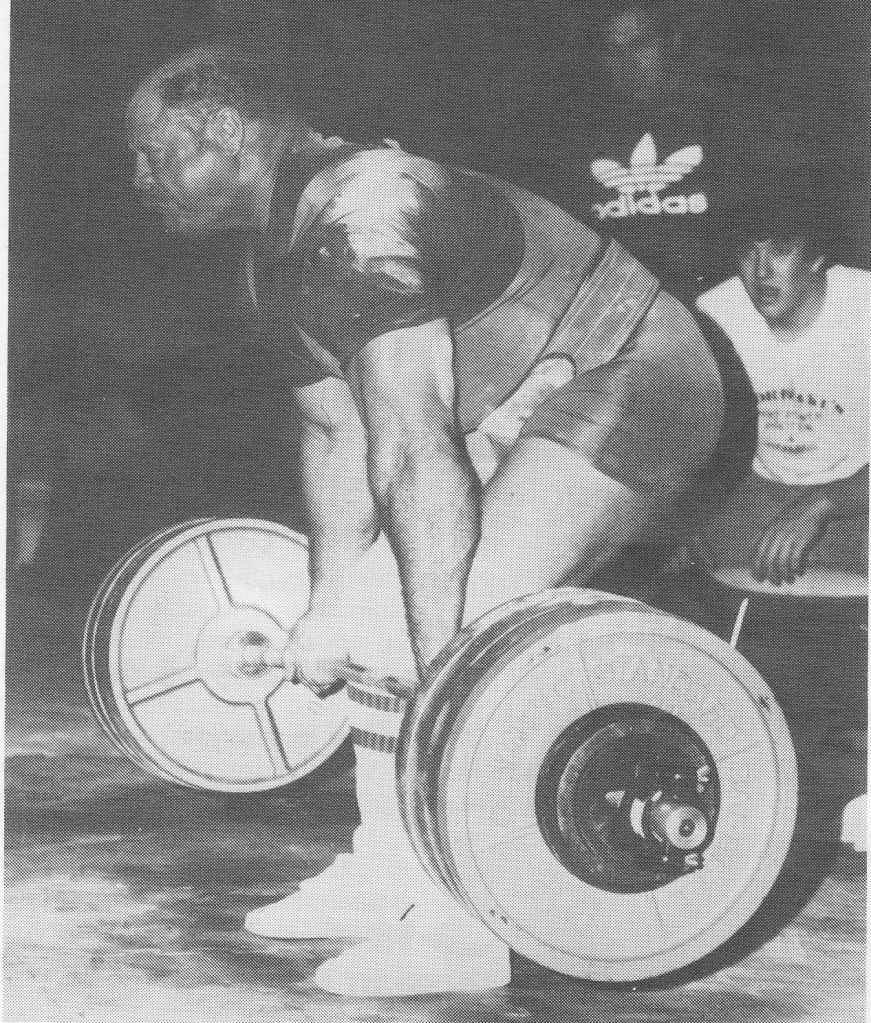 Larry Kidney, though well renowned for his squatting, is a top notch puller who makes good use of the lats and upper back muscles for the deadlift: "As the weight passes the kneecaps, try to FLEX your lats (as if you were trying to do a simple lat spreading movement). This will lock the lift out." Larry recalls how fellow police officer and lifter Louie Hernandez was having trouble with the lockout, and under his guidance worked the daylights out of his lats and rhomboids. His lift zoomed to nearly 700 pounds.

Yes, the deadlift seems simple, until you start training it! One can get lost in the maze of styles,  training philosophies and accessories. After talking with some of the top lifters of the day and doing some homework, I have come up with the following 'conclusions'.

1) Examine your body type to see if conventional or sumo will be the most efficient.

2) Work the entire back structure. Fred Hatfield recommends doing a lot of bent rows, shrugs and rounded back deadlifts. Or you can use the Frenn/Starr Olympic pulling method.

3) Pay strict attention to form, no matter what style you use.

4) Accessories -- the general feeling among top pullers is not to become dependent on straps for the grip, unless it is an assistance exercise such as hi-pulls, shrugs, or extra-heavy partials. Some, like Pacifico, prefer doing knuckles-front-grip deadlifts with with straps to avoid the inherent twisting motion that occurs in an over-under grip. If this is done, Pacifico likewise recommends doing a lot of grip work (wrist curls, wrist rollers, holds, etc.). Again, most do not resort to a super-tight suit or excessively tight knee wraps (if at all), because there is no 'recoil' effect in the deadlift.

5) Grit your teeth (if you have any, that is) and PULL LIKE HELL!