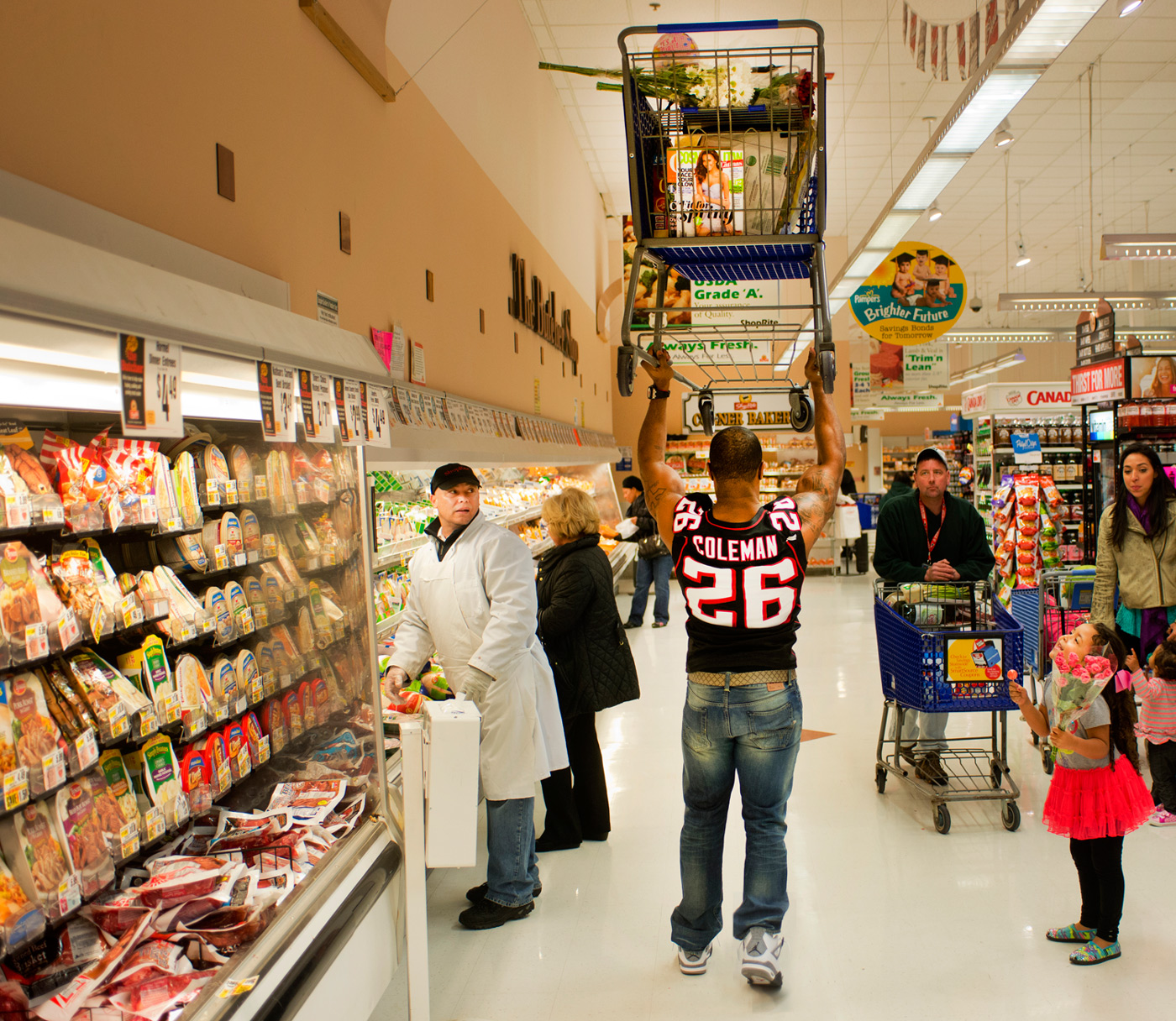 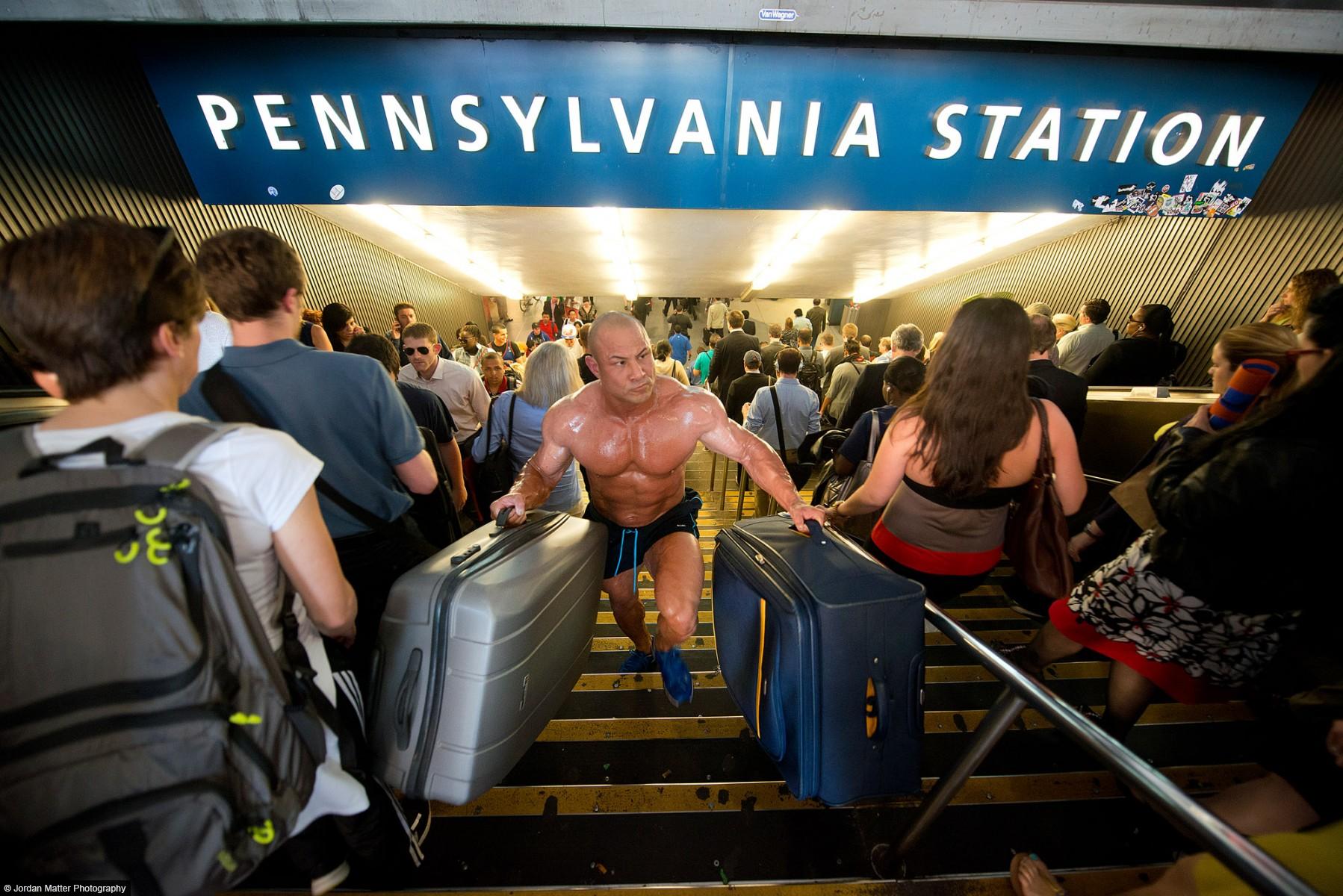 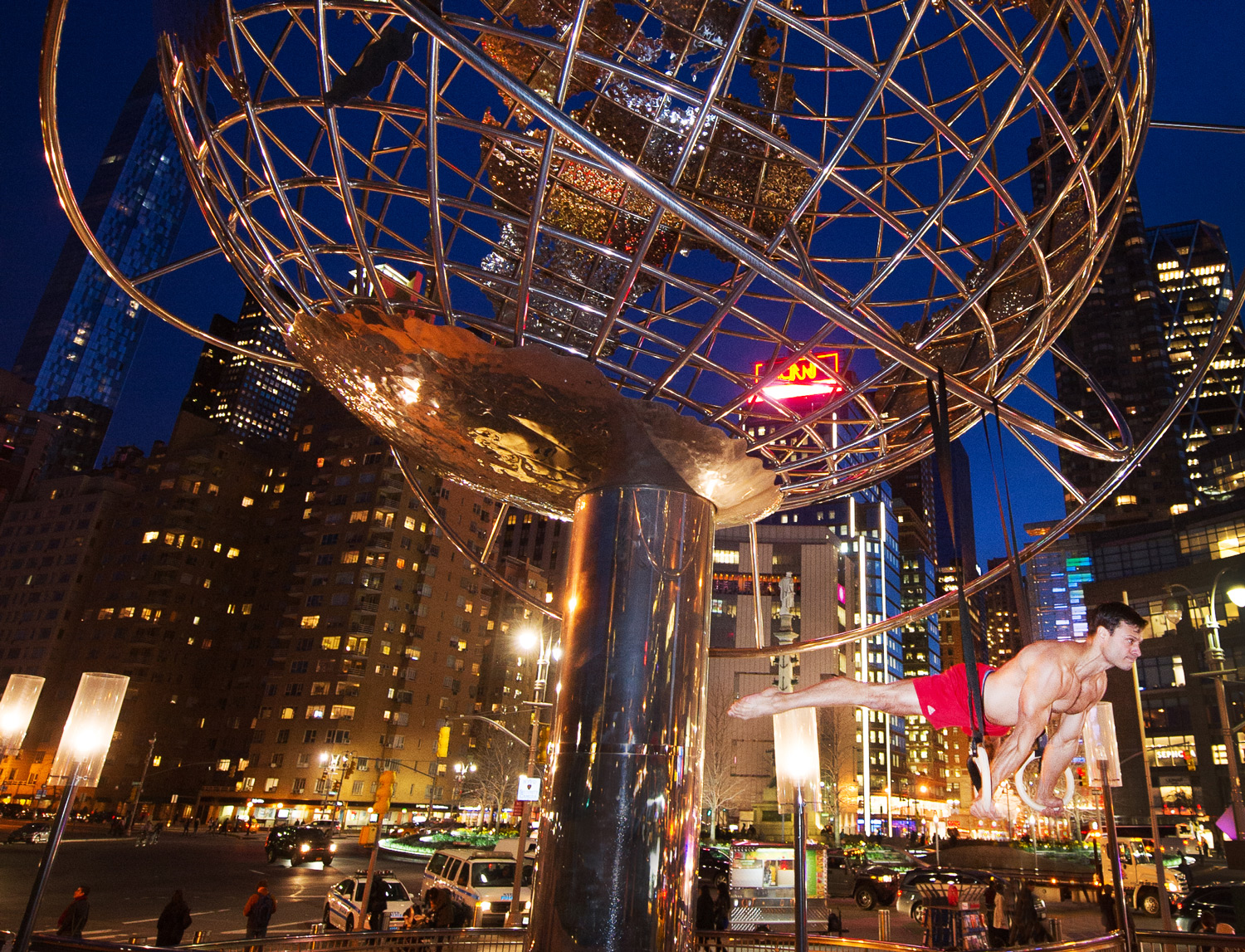 "Athletes Among Us"
photography by Jordan Matter

Schwarzenegger Before and After Photos


In most weight training establishments there is a myriad of physical training devices which, to the general public, must resemble some of the equipment that was used in a Vincent Price movie. Most young trainees are attracted to the shiny, padded machines and often will pass by some of the more conventional pieces of apparatus. One such neglected and misunderstood device is the cambered bar.

I first saw a photo of a strange shaped bar in a 1967 magazine which depicted former Mr. Universe, Bruce Randall, performing a good morning exercise with a monstrous weight. The weight was so heavy that the Olympic bar he was using was actually bent somewhat by the stress placed on his wide back due to that excessive weight.

I next encountered this strangely formed bar at the local Hartford YMCA where I learned the rudiments of weight training. Because lifters had left large weights on the one Olympic barbell overnight for many nights, the bar was bent in a curved position which seemed to make performing the good morning exercise easier and allowed me to do a deeper bench press. 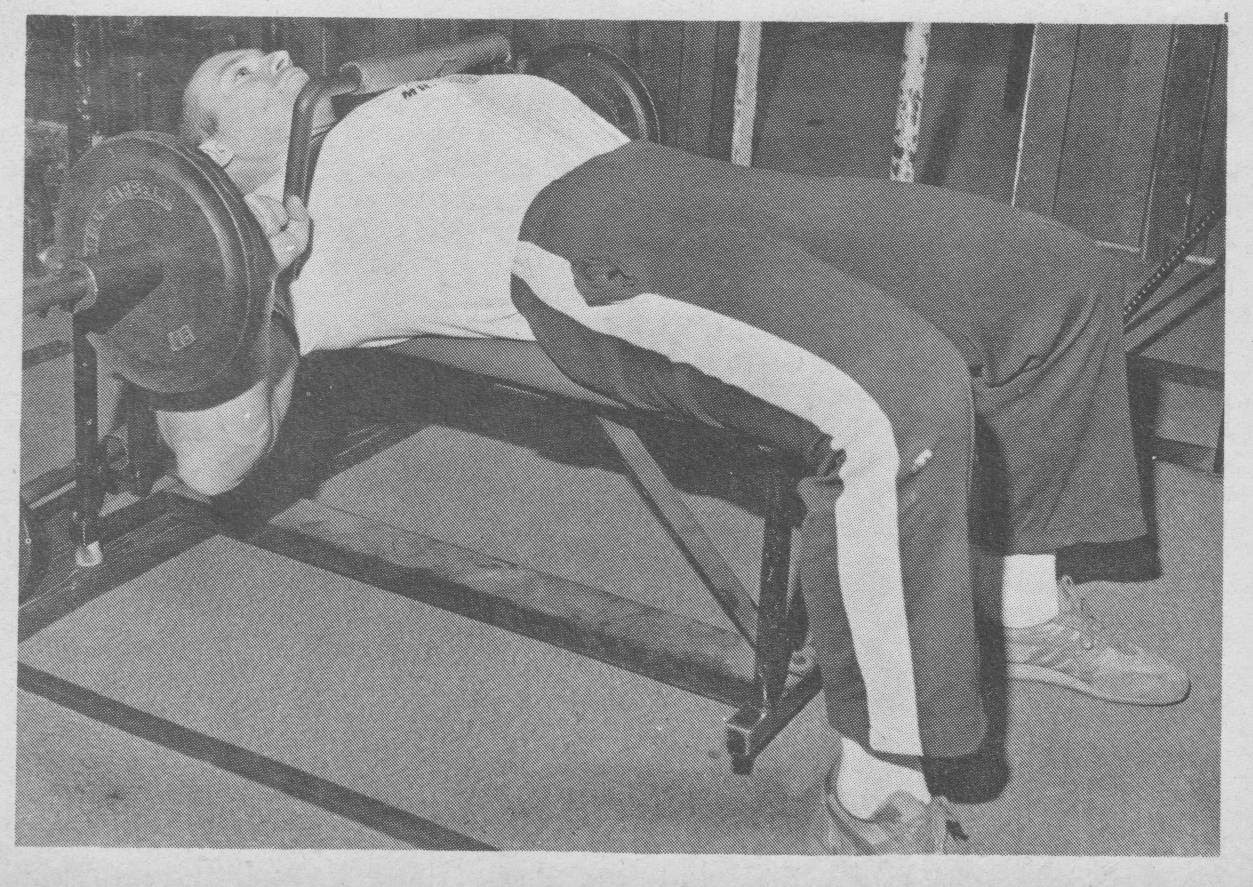 Deciding that this bend in the bar could be useful for bench pressing, I asked one of my Dad's friends if he would weld a barbell according to my instructions (the bar was U-shaped towards the center and its measurements were specific to my shoulder width in 1968). Upon receiving the bar, we named it the 'horseshoe barbell' because of its unique shape in the center. Other people began  to use the bar and in the early 1970's I noticed that this horseshoe bar could be purchased from various equipment companies which labeled it the cambered bar.

Although the use of the bar spread, I noticed that most people used the horseshoe bar primarily for one use only, the bench press. It is the purpose of this article to explain the many uses of the horseshoe bar, which most of our trainees at Gallucci's Gym include frequently in their routines.

The horseshoe bar can be used for increasing the depth (stretch) in the bench press. This will allow greater flexibility at the shoulder and increase strength and hypertrophy development. Because the most severe muscular contraction is a contraction while that muscle is stretched (in this case the the pectoralis and anterior deltoid), you must warm the area thoroughly by using a progressively heavier load (this will decrease the incidence of injuries which can result from this exercise). Personally, I use 3 to 4 sets of progressively heavier warmups before I reach my first set of 6 reps in the horseshoe bench press. If you want to increase your bench press, stimulate muscle growth, and experience the soreness which is commonly associated with growth, try this exercise on a regular basis for 5 sets of 6-8 reps.


The old Bruce Randall exercise! Using a straight bar and placing that bar on the cervical area (neck) of the back, I maximally used about 200 pounds with great discomfort. I always felt like my neck was worked harder than my lower back and hamstrings. The horseshoe bar can be placed on the thoracic vertebrae (between the two scapulae-shoulder blades). This allows the trainee to hold the outside sections of the bar while placing most of the stress from the resistance on the upper back rather than the neck.

Lock the knees and go from the upright position to a position where the upper body is parallel to the floor (see photo). Keep the head up and breathe in on the way down. When completely coming erect, forcibly blow air out from the mouth (his helps to clear the head and curtails the Valsalva movement - the restriction of blood flow to the head causing blackouts). This exercise greatly works both the hamstrings and the lower back muscles.

3) Horseshoe Bar Squat
For many years, I tried to do a front squat and found that:
A) It is a very difficult exercise (balance is hard to maintain due to supporting the bar on the shoulders. Slight movement can cause loss of balance).

B) It is a very dangerous exercise (tremendous stress is placed upon the acromio-clavicular joint of the shoulder.

C) It is  a very discomforting exercise (depending on one's anatomical development, i.e., if the trainee does not have sufficient anterior deltoid development he may find it extremely difficult to support the bar.

Because the benefits of the front squat are so great, I have many trainees who want to do front squats but who never excelled at them because of the 3 D's (difficult, dangerous and discomforting). The horseshoe bar provides a means of performing the front squat by placing the bar in the same position as the horseshoe good morning exercise (upper back area) and squatting down to a parallel position. There is no stress on the neck. There is less stress placed upon the acromio-clavicular joint (especially if the bar is slightly less than your shoulder width - see photo above). Balance is greatly improved. The greatest improvement is the stress placed directly on the quadriceps and the thigh in a straighter position which places the resistance on these areas and not as much on the gluteal area. 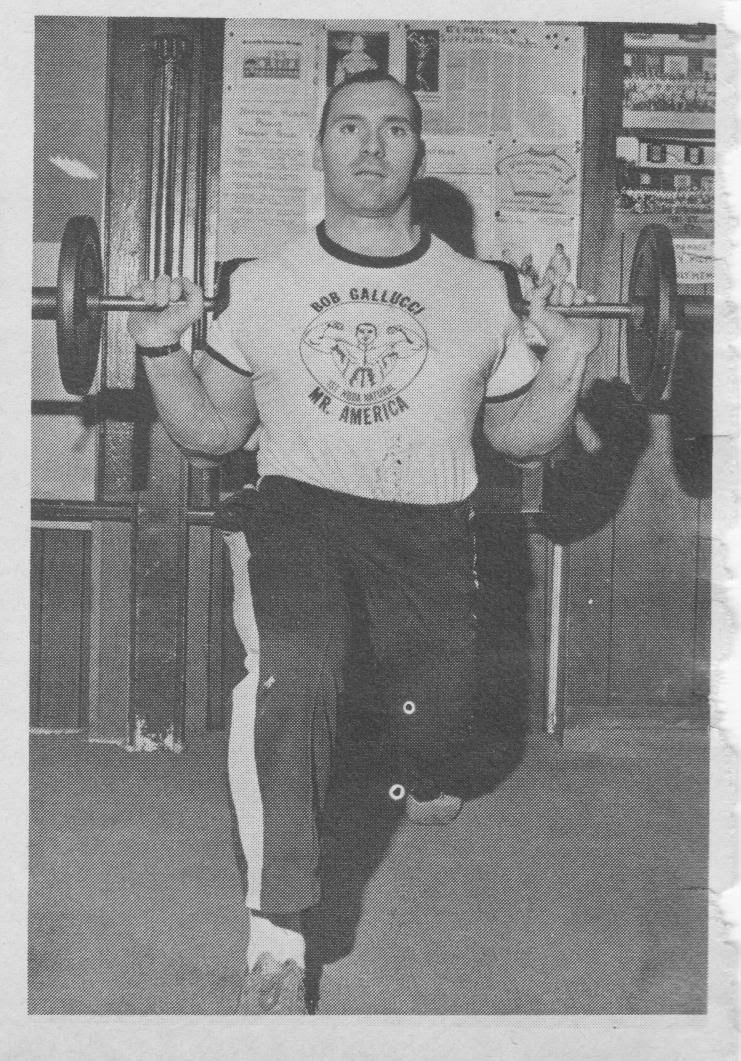 The bar should be placed on the upper back (same position as in exercises 2 and 3). Standing in an upright position, lunge forward with one leg so that the thigh is parallel to the floor. Push off with the extended leg back to the starting position. Repeat with the alternate leg. This exercise offers the trainee greater balance and less discomfort in the cervical area because of bar placement. This exercise works the quadriceps and thigh adductors.

Simply hold the bar  by the outside grips and allow the bar to hang at arms' length from a standing position. Begin rotating the bar in a circular fashion from front to back without bending the elbows. Notice the improved range of motion that the horseshoe bar allows when compared to a regular barbell. This exercise works the trapezius and upper back muscles primarily.

I love to press behind the neck. Unfortunately, I have developed a severe acromio-clavicular problem from this activity. By using the horseshoe bar I am able to press the bar in a straight line from earlobe level to a full extension. Grasp the barbell on the outside grips and remove it from the rack or stands. The horseshoe part of the bar should be directly rearward. Press the bar straight up. This exercise allows the trainee to place great stress on the deltoid and triceps muscles with less stress on the shoulder joints relative to the press behind neck. It is a little difficult to perform at first, but allow time to physically and mentally understand the exercise and you should find it most helpful.

One of the biggest complaints when performing a decline pressing motion with the regular barbell is the lack of range of motion. The horseshoe bar remedies this problem. While lying on a decline, take the bar off of power stands. Grasping the outside gripping area, lower the bar towards the chest. Press straight up and exhale. You will find that you are able to increase your range of motion in this exercise by 4-5 inches and that you are placing increased stress on the muscles of the chest and shoulder areas. It is one of my favorite exercises and it requires a spotter to do forced reps.

These are the main exercises that have found to be of outstanding value when used in conjunction with the horseshoe bar. There are others as well.