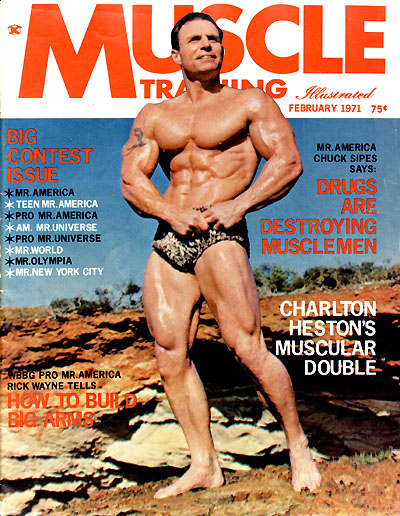 My age at the time I began the specialized abdominal training was 36 years. One of the most important considerations that I give to any type of training is the key to good health. I feel that waist training is The Key to Good Health. By this I mean that abdominal exercises have a great toning effect on the internal organs as well as the muscle structure itself. This, in turn, relates to nutritional aspects. Waist training,  when done properly, seems to result in internal well being. Such work will often improve digestion, which, in turn, will break down the food enzymes and proteins taken into the body via nutritional foods.

To me, the waist region is one of the most important areas from the standpoint of bodybuilding and complete physique development. Most bodybuilders concentrate more time on what they consider the more showy muscles. This would be the arms, shoulders, and chest areas. As a result, they have a lack of quality abdominal development simply because they don't work them with as much EFFORT as the muscle areas just mentioned. I personally believe that the abs are indeed the most eye-catching of the bodyparts.

Throughout my career of 30 plus years in the weight game, I have always tried to adhere to a very balanced diet of proteins, fats, and carbohydrates in a sane and balanced ratio. There simply isn't enough space in this one article to deal with both abdominal specialization and proper diet, so I will stick to the training layout here.

I believe to bring out the absolute maximum degree of muscular development in the abs, or any body part for that matter, one must dedicate a period of time just on a certain body part to realize for oneself the maximum potential of the muscle growth, muscularity or strength. This particular abdominal specialization program has a duration of one year.

At the time I began training on this program, my bodyweight was 190 lbs and my waist measured 32 inches. I concentrated on hard and vicious workouts. This factor in itself keeps the sets and reps per exercise low key per version.

There are many factors that are all a part of the musculature's visual effect. Heredity, which is the muscle structure you were born with; skin 'thickness' - some people just seem to have less of a layer of fat between the muscle and the outer skin surface. I am fortunate in the fact that my skin is thin. I have just touched on a few of the considerations involved in this muscle area. I will go into more detail later, but to sum it up in terms of exercise movement, I believe that the HIGH INCLINE SITUP on an incline abdominal board has helped greatly to develop to the greatest potential for my frontal abdominal thickness. I always use some sort of weight behind the head in this movement.

I feel that my lower abs don't respond quite as quickly as I would like them to. I think when I outline the abs routine later in this article the readers will better understand how I corrected this problem.

After 20 years of experience in the iron game I believe that one develops a second sense to whether or not a muscle area is being worked properly. I go by the feel of the muscle ache and tightness in a muscle region. By this method I know if I am having a productive workout rather than just doing set after set. Whenever I specialize on a body part, my stamina and endurance improve remarkably. In this way, the muscle ache and tightness I spoke of subsides quickly and because of this, there is less rest between sets.

If I am on specialization work for the abs I rest only momentarily between sets, probably less than 10 seconds. On most of my regular schedules my rest periods are between 20 to 30 seconds and no more. The first six months of the year long program I perform the exercises 6 days per week and twice per day. The second six months I perform the program 6 days per week and 3 times per day.

My favorite exercise for the abs is the high angle incline situp with a 25 lb weight held behind the head for resistance. I am not the type of individual who needs to have a wide variety of exercises to be happy. I personally prefer the basics and have continued to make progress on them over the years. The only change I did with this abdominal work as to change the order or sequence of the exercises performed. I would do this every four weeks or so. This gave my mental attitude a lift.

Here is the exact program:

Incline Situps - 2 sets of 25 reps.
I would hook my situp board n the middle range position of the 7-rung abdominal ladder.

Incline Situps - 2 sets of 8 reps.
I used a 25 lb plate behind the head for resistance. Working from low to high elevation on the ladder (7 rungs), I would do 2 sets at each position. On these weighted incline situps I would focus strongly on flexing the abs with deep tension.

* Front Bends - 2 x 50.
With a stick or bar held behind the neck, I would expel all the air from my lungs and bend forward to a parallel position to the floor.

* Side Bends - 2 x 50.
With a stick or bar held behind the neck, I would bend from side to side in a rapid succession touching the elbows to the sides and striving to crunch the abs.

* Use quick fast movements on these two exercises.

Incline Board Leg Raises - 4 x 8.
I used iron boots for added resistance. Each week I would vary the angle of the inclined board from medium to high for the required sets. Sometimes for variation I would substitute HANGING LEG RAISES FROM A CHINNING BAR. I concentrated on tightening the abs with each movement.

Stomach Isolations 4 x 8.
This is a tremendous exercise for internal ab health and great for development as well. I concentrated on a high degree of vacuum, forcing the abdominal region forward.

I will now list some points that will show that this program is very intense in its entirety.

2) I increased the SPEED of movement over the 12 month period and this added to the intensity of the exercises.

3) I kept continuous tension on the abs throughout the exercise movements.

4) I concentrated deeply into the muscle area so as to achieve and deep ache and tightness.

I was also able to reach a peak of strength during this year long abdominal specialization program. My bench press, for example, was nearing 600 lbs during this period. All of my various body parts reached zenith growth and development. Of course, you must remember that this program was in part successful due to my 20 plus years in the iron game and I have great recuperative powers.

I must add that someone else following this routine may not achieve the degree of results that I did. This might be so, even if one were to follow the program to the letter. The reasons behind this are hereditary (abdominal formation that you were born with), skin thickness, mental dedication and connection to training, energy levels, and age of the trainee.

After age 30, one would find it very hard to develop prize-level abdominals unless the practice of controlled waist work had been adhered to years prior, such as I have done. I have never allowed my waist girth or development to get out of hand. Abs have always been a priority group to me. Overall  though, one still can realize great improvement in the abs by following this year long program. I believe that one should be sensible enough to realize that one can't just jump into the exact listed number of days, exercises, sets, reps, speed of movements, and all the tensing and muscle flexing that gear this program to its greatest intensity.

First, take into consideration the present physical condition of your abs, your bodyweight, age, and finally your projected abdominal goal. I believe that one could begin to work into this program by beginning with a mild routine of abs work. For example, one might begin on a simple program of waist work. Use one exercise session 3 days per week. As the waist gets conditioned, increase the amount of exercises, sets and reps and most important, the speed of movement.

After this one year of specialization is completed, the best way to taper off and maintain the greatest muscularity and skin tone from this program is to always include 15 to 20 minutes of rapid and vigorous waist work each workout, and the results will hold. I have done this for the past nine years and my abs are in better muscular condition than they were on the night I won best abs at the IFBB 1968 Mr. World contest.