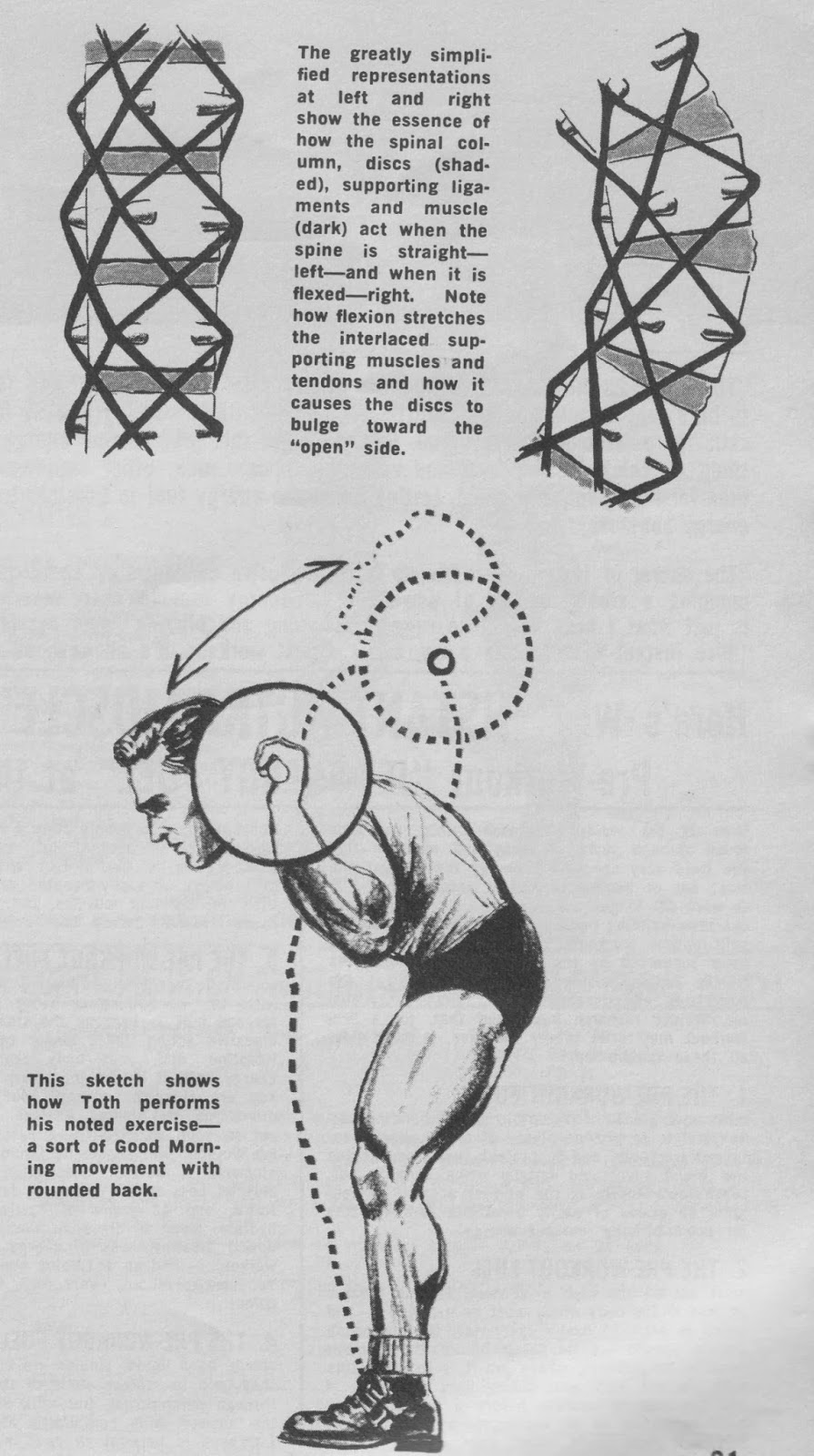 Sometimes, as the old saying goes, we are unable to see the forest for the trees. We tell weight lifters - and anyone else who will listen - to keep their backs flat when lifting. We sometimes tend to forget that those we are instructing are only human and are, therefore, subject to human error.

Think it can't happen to you? It's a well known fact that America's leading heavyweight, Norbert Schemansky, has injured his back so severely that he has had to have surgery to correct the painful disability. That he recovered well enough to set world records is a tribute to the efficacy of weight training exercise and to the to the indestructibility of Schemansky, but the fact that he was injured is proof that it can in fact happen to anyone - even a man strong enough to set world records in the two top bodyweight classes.

How can this be? Aren't well-trained muscles strong enough to withstand great strain? They are, indeed, strong enough to withstand strains that would hospitalize an average man, but all things are relative. You have to remember that the weight lifter works with his back flat so that his spine is essentially straight. The muscles around his spine thus work nearly isometrically to maintain stability.

When the trained man fails to hold his flat-back position for one reason or another, unaccustomed strain is thrown suddenly on the muscles that are not prepared for the stretch or the effort required through more than the usual range of motion. The result is usually a strain or a more serious sprain, but seldom more than a painful experience. There is, however, also the possibility of injury to one of the cartilage discs that serve as pads between the vertebrae.

As a member of the British Society of Remedial Gymnasts, I have occasion to exchange ideas with other members, including physiotherapists and physicians. Recently they have agreed with me, in general, that the back muscles must be exercised in positions other than the correct lifting position, in which the muscles are held under tension isometrically, but receive no other type of work. The usual approach to exercising the back through a range of motion has been to recommend the stiff-legged deadlift, but instructors seldom explain why the exercise is important.

When the stiff-legged deadlift is recommended, the instructor usually cautions that no more than body weight be used, because of the risk involved in lifting with the back in an inefficient position. Actually, a man in good condition can train himself up to a level of strength and flexibility that permits him to handle weights in the stiff-legged deadlift that are not much less than he lifts with bent legs.

The construction and activity of the spine are the main reasons rounded-back lifting is considered inadvisable. Ordinarily the vertebrae are stacked solidly atop one another, with the cartilage discs between them acting as shock absorbers. They are held in position by small muscles and ligaments that attach from one vertebra to another, but if the back is suddenly unlocked from its natural position while supporting or raising something heavy, these small muscles and/or ligaments can be strained or torn.

This sudden, unaccustomed motion is, I believe, the cause of a large percentage of back strains. I believe that these strains can be avoided, but to do so, the back muscles must be exercised systematically over their full range of motion and not just in a static position. Entirely too many weight lifters and other athletes fail to deliberately exercise their spines through a range of motion.

Let's consider the movements that are possible with the spine:

(1) Flexion -
When the spine and only the spine is bent forward forward so the lower end of the sternum is brought as close as possible to the pubis, or when the lower ribs are brought downward as much as possible toward the top of the thighs. (You flex your spine, of course, when you lift with your back rounded, as in the stiff-legged deadlift.)

(2) Extension -
When the spine is straightened from a bent-forward position.

(3) Hyperextension -
When the spine is extended backward beyond a normal, erect standing position. This is the opposite of forward flexion. When a good competing weight lifters thrusts his hips forward and raises his chest high as he follows through with his pull in the middle and upper range, his back is arched into hyperextension.

(4) Lateral Flexion -
When the spine is bent to the left or right, without backward or forward movement.

(5) Rotation -
When the spine is turned or screwed clockwise or counter-clockwise while the hips remain stationary.

(6) Circumduction -
When the hips are kept stationary and the head and shoulders are moved in a circular motion, practically all the proceeding movements are brought into action.

To prevent injury that can result from sudden change of position or from moving into an unaccustomed range of motion, the back must be exercised to accomplish two ends:

(1) accustom the spine and its surrounding, supporting structures to full range of motion, and

(2) strengthen the supporting muscles and ligaments.

The exercises I would recommend to accomplish these ends are few and simple, but are important enough that I encourage you to practice at least one of them.


Basic Range-of-Motion Exercise -
Pick up a barbell of about half your body weight with the normal overhand grip (as though you were going to clean it) and raise it to the dead lift finishing position (barbell across thighs, arms hanging straight). Round your back by flattening your chest so the bar moves down lower on the thighs, then straighten fully and arch back with your chest held high. Repeat for 3 sets of 8 repetitions. Add weight when able, but keep the repetitions at about 8 to avoid overloading.

Advanced Range-of-Motion Exercise -
After a thorough grounding in the basic exercise, you can progress to a favorite of Geza Toth, Hungary's runner-up at the 1964 Olympic Games. This exercise might be called the "Rounded-Back Good Morning Exercise." You place the barbell across your shoulders as if to perform squats and stand with your feet a bit wider apart than the width of your hips. Breathe out and flatten your chest, then bend your knees and hips so that you allow your trunk to come down and forward into what should look like a badly-performed half squat. Then return to the erect starting position. Use a weight that is heavy, but comfortable for 4 sets of 5 repetitions.

Toth has worked up, over a period of time, to use 220 pounds in sets of five. But a beginner at this exercise should start with a weight that is about one-fourth of his bodyweight, and then work up very gradually. This is definitely not an exercise to try limits with.

Toth told me, in our mutual language of German, that Hungarian team physicians solidly endorse this exercise. They say there is less danger of back injury when this exercise is performed with rounded back than there is in the usual type of good-morning exercise in which heavy weights are attempted with the back held flat. Toth claims that the exercise not only helps prevent injury, but also greatly improves pulling power.

Most athletes and weight training authorities have been reluctant to deviate or to recommend deviations from exercising in the flat-back position, but I feel that it is important to perform range-of-motion exercises involving the spine. If you will digest the information in this article, I think you will agree with me. And I believe that if you will try the exercises recommended above you will see your back power increase.