One Exercise Per Bodypart Routine 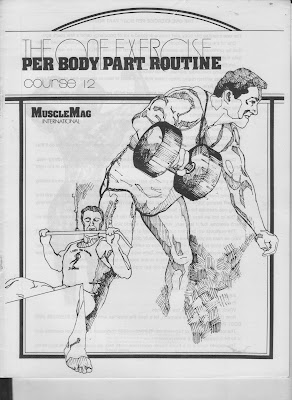 The one exercise per bodypart routine enjoyed a lot of popularity quite a few years ago. One of the greatest physiques of modern day bodybuilding, Reg Park, often used to say that he preferred one biceps exercise and one triceps exercise only, when he was trying to gain size on his arms.

Another advocate of the one exercise per bodypart school is gym owner Vince Gironda. Vince has written many, many times that he feels it is best to develop one aspect of each muscle at a time.

It is popular nowadays to do three exercises per bodypart for three sets each, making a total of nine sets. But is this really more effective than using only one exercise per bodypart doing nine sets of that particular movement?

Vince Gironda thinks not. He believes that the muscle will be more saturated with the one exercise done for nine sets. He goes on to say that most of his students gain rapidly when they cut back to only one exercise per body part.

How Concentration Can Help

You've probably heard it said many times that 'it's not what you do, but how you do it that counts'. Concentration really does apply to bodybuilding. Anything that can make you concentrate more on the exercise is certainly a step in the right direction.

This is not an easy form of training, because of the higher than usual amount of sets on each exercise. But it is a very good way to add size in a short period of time. The workouts will be short but the energy expended will be quite high.

The routine consists of two routines. The first contains 8 sets per exercise and is to be followed for a 6-week period.

The second routine is a blockbuster consisting of 15 sets per exercise, and is also to be followed for a 6-week period.

Train four days per week as follows:
Monday/Friday - train your thighs, calves, chest, and back.
Wednesday/Saturday - train your deltoids, biceps, triceps, and forearms.

Spend a couple of workouts getting familiar with the exercises and the layout, and try to get up to at least four sets of each movement, without strain. For the following six weeks do this:

4) Bentover Rowing.
8 x 8. Same system as squat and bench. This is your final exercise of the day, so work it hard.

1) Seated Press Behind Neck.
8 x 8. Same layout as squat and bench, but rest only 30 seconds between each set.

2) Barbell Curl.
8 x 8. Allow 5 minutes rest after the presses, and then do 2 warmup sets on the barbell curl. Do another 6 work sets with using the same weight for each, with rest periods between sets as short as possible.

3) Decline Pullover/Press.
8 x 8. Lie on a shallow decline bench and hold a bar at arms' length with a regular grip of about 10 inches. Keeping your upper arms rigidly stationary lower the bar down towards your face and behind your head till the plates just brush the floor. Instead of going back the same way, pull the weight over your face to your upper chest. Now, with the emphasis on your triceps, push press the weight to arms' length again. You should able to master the technique after a few tries. Do the same set system as the barbell curl.

4) Wrist Curl.
8 sets of 12 reps. Lay the back of your forearms across the top of your thighs, and with a thumbs-free grip do 8 sets of 12 reps with only 30 seconds rest between each set.

Try to increase your training poundages over the next six weeks, and above all CONCENTRATE!

Take a full week off and then continue with -

After resting as long as you want, do another 2 sets with the same weight. When you get 5 reps on all three heavy sets, increase the weight next workout by 5 pounds.

After your last set of 5 reps, reduce the weight so that you can do another set this time for 8 reps. Resting only 30 seconds between each set do 10 sets of 8 reps. These should be very hard to do and you may have to reduce the weight each set in order to get the full 8 reps. Don't worry about this. It doesn't matter how much weight is on the bar, just keep going set for set with 30 seconds rest between each until your thighs are bursting.

3) Bentover Row.
5 sets of 5 reps, and then 10 sets of 8 reps. The same layout as the squats. Do your rows as strict as possible with emphasis on the lowering part. Get through these rows as quickly and efficiently (machine-like) as possible and the workout is over.

2) Seated Press Behind Neck.
5 sets of 5 reps and then 10 sets of 8 reps. Your 5 sets of 5 should be hard but do-able, however, you will find the going extremely tough on the 10 sets of 8. Don't despair, and remember that you can reduce the weight each set if you have to.

3) Decline Pullover/Press.
5 sets of 6 reps and then 10 sets of 8 reps. Perform your 5 sets of 6 in very good style, pushing the poundage when possible,and then go straight into your 10 sets of 8.

Do stick with this workout for the full six weeks, and you should make some really terrific gains.

Don't be put off by the high number of sets. As you will be doing the lighter sets (10 sets) with only 30 seconds rest between each the pain will soon be over.