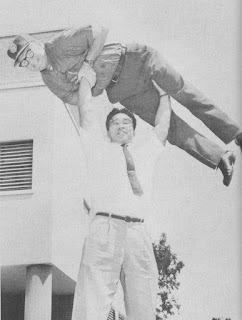 
To ask the above question of any eager weight training enthusiast is to be strongly assured that big muscles are an all-important asset to anyone indulging in some form of lifting program. But put this question to the average, non-exercising individual and you are sure to get a variety of pro and con answers, and just as many reasons.

I don't think it would be very difficult to ascertain what the reaction and answer each reader of this magazine [Strength & Health] might have to this question. It's a foregone conclusion that most of our readers do favor big muscles, and an 85% estimate might be a conservative figure. But the question is, are big muscles really necessary? And if they are, on what basis have these conclusions been formed to justify the answer?

I've been interested in the answer to this question for a long time, and frequently have discussed and debated the issue without reaching any satisfactory conclusions. Many of you have done the same thing. Perhaps by presenting some of my views you can form your own conclusions after you've read this.

During my earlier travels I gave countless exhibitions at various social functions such as the Lions, Rotary Clubs, etc., and never failed to be asked whether I thought big muscles were really important. I never answered the question directly because I knew that while big muscles were impressive they were not important to enjoy life or good health. Yet I always felt that if an individual developed his muscles properly he could do certain things better and more efficiently, and to this conclusion I never got an argument from any of the men who asked me this question. A few would try to insist that big muscles hindered rather than accentuated movement. But when they witnessed my backbend, the split, rollover, etc., the knew that at least in my own case big muscles did not hinder my activity even though some were still not convinced.

The led me to ask others the same question in hopes of trying to form a more concrete conclusion from hearing the reaction of others. Invariably the person who was associated with the iron game always agreed that big muscles were of greatest importance, but the professional or non-lifting individual always seemed indifferent. One thing most everyone agreed on was that big well-shaped muscles did enhance the appearance of the person and therefore looked more like the Man that god intended him to be. Most athletic coaches at that time were positive that big muscles slowed up a man and an athlete should avoid trying to acquire them. But that was years ago. Most of the track and field athletes today have fine, strong looking physiques . . . and this is because they train with weights!

Big muscles, when proportionately balanced, do improve the appearance of the individual, making him look more athletic even if he isn't. It's only when the person gets monstrous or lacks general symmetry, or struts about constantly flexed that criticism is apt to be directed at him. But the average non-exercising man does not disapprove of big muscles; only the unnecessary flaunting or strutting irks him. On the other hand, he does accept big muscles as a sign of great power, particularly when associated with big arms. This conclusion was formed on the theory that big muscles are acquired from heavy lifting and exercise, and this would indicate strength. These deductions are correct, but only up to a point, as I will explain later on.

The fallacy of this accepted conclusion - big muscles in relation to strength - is exploded by the majority of lifters, many of whom are well built but who actually do not have big muscles - with but few exceptions. One example is Ike Berger, former world and Olympic champion, who has an excellent physique, with fine muscularity and good proportions, but he cannot be placed in the big-muscle category. Nevertheless this lifter is very strong, and much, much stronger than most men for his size. Weighing around 135 pounds he actually shoved 270 overhead in a rough press, or about a double bodyweight press. This powerhouse has done around 475 in the squat, and pulled in to his shoulder 341, a very remarkable lift for any man, let alone for one weighing slightly over 130 pounds. How many big muscle men who outweigh Berger by 50 or more pounds are able to rough-press that much weight? Not very many, and those who do are probably lifters. 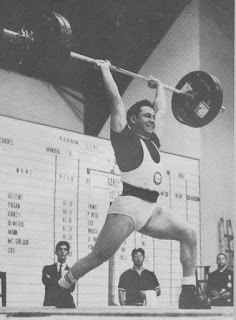 
Tony Garcy, lightweight champion, is another well-built lifter who has a very fine physique but who does not have that heavy musculature that would place him in the big muscle category. His lifting ability, however, speaks for itself. His 290 pound press, 265 snatch, and 336 clean & jerk plus heavy supports in power rack all point to his prodigious strength. 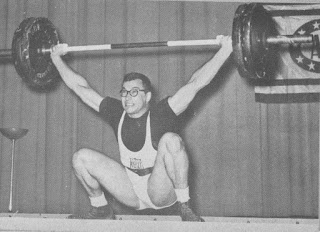 
Jim George is another lifter who never had very much obvious muscle to speak of, but what he did have was of good quality. His arms were never large, probably around 15.5 inches or so, yet he actually pressed over 300 pounds. He was capable of snatching 303, then a world record, and a 380.5 clean & jerk, also a record. These are terrific poundages and it's incredible to see him get those weights overhead. You can't help but wonder why his arms didn't snap under the load. He has often jokingly said that if he had any bigger muscles they would probably get in the way, hindering his lifting. Most everyone who knew Jim always felt that if he had just a little more muscle he might have lifted even more than he did. But this man lifted some very heavy weights and he didn't have any muscle size to speak of. 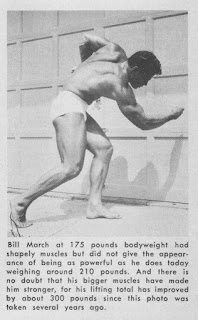 Bill March, of course, greatly increased his strength as his muscle size increased. His massive arms and shoulders were not acquired from the various types of curling and shoulder exercises, but they developed strictly from lifting, heavy supports on the power rack, and a great deal of isometric work. 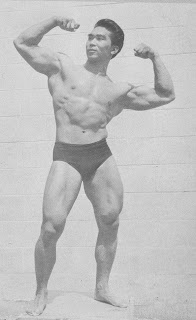 
Tommy Kono is another powerful lifter who won a number of world and Olympic championships,and had actually been chosen three times Mr. Universe (FIHC) winner. Kono also cannot be included in the big muscles class, but the weights he has lifted proves more conclusively that you don't need big muscles to lift record weights.


Norb Schemansky is another powerhouse but he has big muscles to go with it. He may not have the wedge-like physique of a Mr. America, but very few Mr. Americas can approach anything near this lifter's phenomenal arm and leg development. Here is one case where big muscles and tremendous power are closely associated. However, when you understand how Schemansky got big, you'll know why he's as strong and as big as he is.

It may surprise a lot of bodybuilders to learn that "Skee" seldom worked for big muscles. His main interest has always been directed towards increasing his strength, and his exercises were always done in such a way as to increase he prodigious power. He believed in concentrating on strength and allowed his muscles to take care of themselves. Bodybuilders, on the other hand, seek only to increase muscle size on the theory that strength is not a factor in physique contests . . . which it isn't. In fact, any man who has a symmetrical physique can win a physique title even if he can't press his own bodyweight. Yet any novice lifter who couldn't press over bodyweight, providing his other lifts are in proportion, wouldn't even place in a contest regardless how well built or muscular he was. Therefore, big muscles and strength do not always go together, and many big muscled men are really not nearly as strong as they appear, although there are many medium muscled men who are amazingly strong. Usually this is due to their method of training and not the size of muscles. Schemansky is big but he is also very strong. Kono, Jim George, Berger, Garcy are all very powerful lifters but none of these have big muscles. 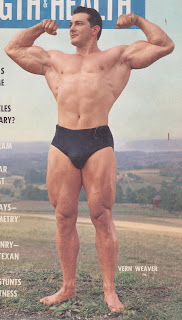 
Vern Weaver, present Mr. America titleholder, was a very powerful lifter before switching to bodybuilding. He pressed over 300, and did a clean & jerk of 365. While bodybuilding he was able to do a 435 decline press, a 540 squat, and a strict 215 curl. Weaver has big muscles and is very strong too, a very rare combination these days it would seem.

Of course, don't jump to conclusions that I am against big muscles (me of all people!). The point I wish to make clear is that big muscles are not absolutely necessary, even in athletics, but if you are lucky to have big muscles you can make them become as asset to you. Muscle developed through your favorite sport can become an unusual asset besides increasing your personal prestige as a muscleman. But big muscles that are nothing more than overinflated, pumped-up tissue are useless. In fact they are apt to shrink or disappear as soon as they are not exercises regularly. But muscles developed through sensible training methods over a period of time are more lasting and usually more efficient . . . and that is the type of muscle you should strive to develop, regardless of size. 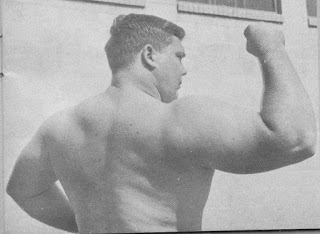