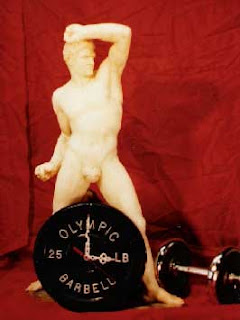 Any of these methods can be used singularly or in combination. With low to moderate weight loss, possibly only one is needed. However, for extreme weight loss only a combination will be effective in the short duration desired.

The trick is to drive the body weight down for as short a time as possible to avoid rehydration of the plasma and interstitium at the expense of the dells. Ideally a series of plasma deletions and repletions a the expense of the interstitium is sought. In this way plasma volume and blood pressure are somewhat normalized and the interstitial space is dehydrated. If this persists too long, however, the interstitium pulls water from the cells and performance is compromised. Interstitial repletion must occur from ingesting fluids before the cells begin to lose too much water. The timing of the dehydration process and the weigh-in must be accurate.

To deplete the plasma, re-fill the plasma by dehydrating the interstitia, weigh in, and reconstitute the body before the cells begin to go flat requires lots of planning and plenty of practice. Art?

Let's look at a normal scenario which I have witnessed several times.

Assuming 10 pounds need to be lost to make the class and that all health parameters are normal and that the lift time is 10:00 a.m. on Saturday. In this scenario the weigh-in will be Friday at 10:00 a.m.

The athlete counts the hours back to decide when to limit water and food. For food the deadline is 2:00 p.m. on Thursday (20 hour fast). The athlete will eat again at 10:01 on Friday. One exception to the fast that helps keep blood sugar stable iseating 6 Hershey bars at regular intervals through the day. They weigh only 2.5 ounces (16 ounces to the pound) and all together will add less than a pound to the gut while providing plenty of calories to avoid hypoglycemia and the sensation that the athlete is starving. Thursday morning should be a moderate breakfast heavy in carbs. The last meal at 2:00 should also be high in carbs but light.

Thursday night the gut should be cleared. This makes for a restless night but nothing a long nap after weigh-in won't cure.

Upon arising (say 6:00) check blood pressure and bodyweight. The laxative and diuretic have had their effect yet there may be between 2-4 pounds left to go.

The plasma volume was depleted by the diuretic but has had time to reestablish itself as demonstrated by a basically normal blood pressure. It is also possible to be at weight in which case there is nothing to do but wait until 10:00!

Within the next 4 hours the athlete must lose 3-1/2 pounds. A dry sauna is a viable option now. The temperature must well exceed 160 degrees or it is not suitable. A sweat bath will suffice in this case.

If a sauna is available the athlete begins with 15 minutes and then re-weighs. Taking regular intervals of several minutes cooling and 5-15 minutes in sauna, re-weighing at every interval. No more than 50 minutes should be needed.

In the event of a sweat bath 30-40 minutes will suffice, assuming 4 pounds needed to be lost. It will be much shorter (about half) if only 2 pounds need to go.

The last 1/2 pound will drift. But if the athlete is unsure of the agreement between scales it is prudent to go 1/2 pound under. That is a difference of 1 pound. This means the athlete must full a Coke bottle with sweat (16 ounces) because they did not go to the trouble of checking the scales against each other! This is wasted time and effort. The prepared athlete can leave the sauna assured they will be on after the last 1/2 pound drifts through respiration and insensible evaporation.

Once at the weigh-in site the first priority is to do an unofficial check. Every thing should be copasetic, but there's always the exception. Weigh-in is open for 1 hour usually and at least 1/2 hour. If the athlete is 1/2 pound over it can be easily lost in the car with the heater running. The athlete can also spit out 4 ounces into a cup in an hour's time. That right. Spit. Chewing gum (or chewing tobacco if so inclined) to fill a cup with saliva will create the desired outcome.

A big mistake here is to revisit any of the preceding methods. They will prove fruitless. A diuretic will take too long (unless using Lasix in an intravenous injection). The sauna is probably too far away as is the bath. Laxatives are also too slow and there isn't anything left anyway (although some suppositories claim to work in 15 minutes this never seems to be the case after one course of laxatives has been run). Standing on one's head has the ability to cause urination by driving blood to the head and setting off a carotid baroreceptor signaling the body that blood pressure has just gone through the roof. This works in normally hydrated states but not very well after sweating off 3-1/2 pounds in the sauna: plasma volume just isn't full enough. Short of drawing off a pint of blood, the options are limited.


Athletes get into trouble when they take a full 40 mg. of Lasix to drip a quarter pound at the last minute. It may do the job, but when they try to rehydrate the drug is still working against them. They drink plenty but are still urinating too much. They can't catch up. Eventually they stop diuresing but they are behind schedule and may not be able to gain the full 10 pounds back before the meet. While 8 pounds is adequate it is not ideal and it certainly is no comparison to 12 or 13 that can occur with rebound (which will be discussed later).

Spitting and heavy ventilation in a heated car are the best bet for small adjustments.

Once weight is officially made, many athletes think their work is over but the truth is that they are at the half-way point.