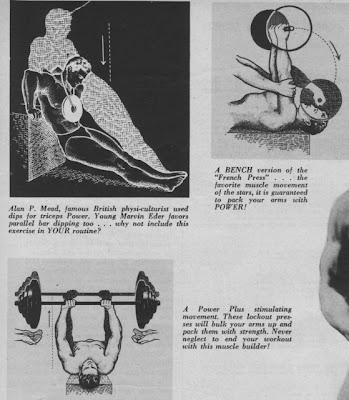 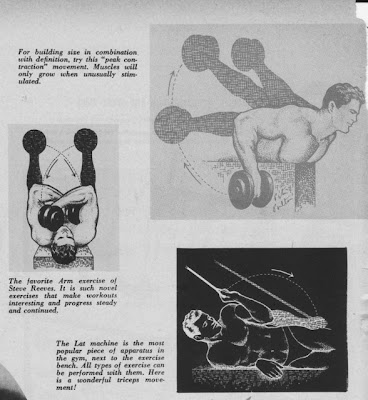 
It wasn’t so many years ago, when I got into an argument over the merits of the exercise bench. Certain members of the Weight Studio held that in company with the incline bench, it was a “lazy man’s” apparatus, and the methods of exercise used in conjunction with it were strictly for the daydreamer. An old daydreamer from way back, I naturally supported the use of this piece of equipment, now recognized as one of the most valuable in the field of weight training. A bodybuilder nowadays will refuse to train in a gymnasium unless it has at least six benches and all of us except for the usual lunatic fringe – use it as it should be used. Its praises are sung by all – except the lunatic fringe again – and I doubt if, even among Olympic men, there is a single weight trainer who doesn’t make use of it somewhere in his training program.

This month’s article is concerned with triceps specialization. It has long been my opinion that the only exercises that will help both advanced men and those of comparative recent entry into our sport are the type best described as “unusual”. The vast majority of weight lifters use orthodox exercises and both beginner and advanced men stick to the customary movements even when undergoing a course of specialization . . .

It is also generally recognized that the one stumbling block to regular or continued progress is becoming overtrained or stale, and it is just as common an opinion that BOREDOM, mental lassitude, is just as big a cause of a bodybuilder failing to make headway. It is relatively easy to figure out. If you eat nothing but bread day after day, week in and week out, you would hardly be surprised if your weight started to drop and you exhibited other signs of physical deterioration. Your appetite would fail, you would look forward to meal time with dread and loathing and at last you would become sick at the very sight of bread . . .

Why it is that some people think they can continue to gain in strength and size using the same old schedule every workout they take is beyond me! Let’s say for example they use the press, curl, and squat. How long CAN a man use such a schedule before he gets everything out of it in the way of development and power – ? Well, that would depend on the man himself, the kind of life he had led, the reserves of vitality and energy at his command and his mental attitude. He might be able to use this program for nine months . . . a year at the outside if he was possessed of unusual will power. But after that period, his interest would wane and his workouts would no longer be a pleasure, but something he did as a duty. Using the three exercises over such a prolonged period would see him dreading the time to press, curl and squat, and at last, fed up with them, he would drop exercising altogether!

No weight trainer should keep on a schedule of exercise after he fails to gain from it. That very day he starts to lose interest in an exercise and a schedule, then he should drop them without delay. The correct way to exercise and make CONTINUED progress is to use a program REGULARLY. As soon as you slow down in exercise progression, CHANGE THE EXERCISES. Let us suppose again! You are using, say, the standing press, the two arm curl, the upright rowing motion, the deep knee bend and breathing bent are pullovers. You get quite good results from these but after a while things start to slow up. You have to work harder for that extra fraction of an inch measurement or five pound increase. Once you could put half an inch on your arm in a month, and “up” your deep knee bend 20 pounds in a like period . . . Now, gains are slow in arriving. Most lifters continue to batter away with their schedule, but the man who uses his head at once effects changes in his training program. He switches to a set of exercises that, while they differ, are yet akin to those he has been using. He might substitute the seated press behind neck for the standing press; use the seated curl or alternated curls with dumbbells; the bent forward rowing motion for the upright style; bench squats for deep knee bends and the flying exercise for the bent arm pullover. You see, it’s simple, EASY to train and gain. All exercise is COMMON SENSE.

It’s the same when you undergo any specialization program. You can make progress only for so long on any one given schedule. The moment progression slows up, then it would be wise for you to drop the old program and start a new one. You can make use of all the customary movements and work hard ‘till the sweat runs off your brow, but you won’t do yourself one bit of good once you no longer have faith in what you are doing . . .

Most fellows start off an arm specialization program by curling for hours at a time. Granted that the arm you obtain will appear imposing and shapely, yet it will not compare with the development that can be yours if you exercise the triceps with as much fervor as you cheat curl. The greater bulk of the arm – roughly two thirds, lies in the triceps. Despite the very good appearance the biceps gives to the arms, it is merely a muscle for show. The triceps is the one that can really give forth with POWER. When you get bored with pressing – bench presses – triceps curls – and other orthodox movements, try these bench triceps exercises.

This is how the program is to be used. First, use your regular workout program. After this is completed, take a rest of 15-20 minutes and then start your triceps specialization program. With each exercise, concentrate strictly on form and the actual function of the triceps muscle – extending the arm. As you raise and lower the weight, visualize in your mind the muscle getting bigger and stronger. When the arm is extended or straight, try and lock the elbow even more fiercely, contracting the triceps tighter and tighter. After each exercise, massage the muscle. Rub and knead it with the fingers, keep the circulation increased by mental contraction exercises. Just stand in front of a mirror and bend and straighten the arm, observing the action of the muscle. When the workout is through, massage the arm with a little warm olive oil . . . If your arms are stiff the next day, a warm bath, followed by another massage with embrocation or athlete’s rub will help to relieve the soreness.


Exercise 1.
One of the most popular movements of recent years is the French Press. Popularized by John McWilliams, it is performed with a barbell. The trainee stands up with a “curl” grip on the bar which is held at the back of the neck. From here the arms are straightened. Here is a bench version of that popular exercise. Lie on a bench with a barbell held in the hands – a little less than shoulder-width – the palms of the hands should be FACING YOU, knuckles to the feet. Hold the barbell at arms’ length above the face. From here lower the weight until the forearms are JUST BELOW the horizontal position. Hold there for a short count of three, then raise again. It is best to have a training partner hold your upper arms throughout the exercise so that they do not assist in any way. ONLY the FOREARMS MOVE – the upper arms are kept still throughout the exercise. Start off with a weight you can handle for 3 sets of 8 reps, working up to 3 sets of 15 reps before increasing the weight and returning to 8-rep sets.


Exercise 2.
Here is an unusual version of the Dip. It is great for building size in the triceps inner head. Take up the position indicated in the illustration. Your arms should be straight at this point. The thighs should be stretched out in front of you. From here dip down until the upper arms are at right angles with the forearms. Straighten arms to commencing position and repeat. Resistance is provided by hanging a barbell plate around the neck. The important part of this exercise is dipping down as low as you can, holding the position and then STRAIGHTENING THE ARMS FORCIBLY. PRESS UP as the arms reach straight position. Start off with 3 sets of 10 reps, working up to 3 sets of 20 reps before you increase exercising resistance, going back down to sets of 10.


Exercise 3.
Another wonderful exercise for the triceps inner head is the following. Lie face down on a bench with a dumbbell in each hand. Raise the upper arms so that they are flat against the sides of the body. From this position raise the forearms until the arms are in a straight line, THEN raise the WHOLE arm UP. As soon as you feel the triceps tighten, hold the position for a short count of two, then lower and repeat. Commence the exercise with a poundage you can handle comfortably for 3 sets of 7 reps, working up to 3 sets of 12 reps before increasing the poundage and returning to sets of 7 reps.

Exercise 4.
The finest exercises one can use on the latissimus machine are those that build the upper arms. It is possible to handle a fairly heavy poundage for a high number of reps, building not only endurance, but strength in the muscle. Here is another of those “novel” movements that are becoming so popular of late. Lie on a bench with your head nearest to the lat machine. You should be on your side with the exercising arm – the upper arm – resting along the lat. Have a training partner pull the handle of the lat machine down to you so it can be grasped. From this position straighten the arm and then when straight pull it DOWN the back. As soon as you feel the triceps “cramp” hold the position for a slow count of three, then raise the arm and repeat. Start off with a weight you can handle for 2 sets of 10 reps and work up to 2 sets of 20 reps before increasing exercise poundage and going back down to sets of 10 again.


Exercise 5.
Here’s one of the favorite Triceps builders of famous Steve Reeves. You can handle fairly heavy weights in this one, too. Lie on a bench . . . on your back. Take two dumbbells. Hold them above your chest at arms’ length. Bend the arms at the elbows and rest the ends of the dumbbells on the chest. From here – and DON’T move those upper arms – raise the weights to arms’ length again by straightening the forearms. Lower and repeat. When you lower the weight, stop short about an inch above the chest and then raise the dumbbells. Start off with a poundage you can handle easily for 3 sets of 7 reps and work up to 3 sets of 12 reps before you add weight and drop down to 7 reps again.


Exercise 6.
The final movement in this program is a “power” exercise. You need a bench, of course, two training partners, and a HEAVY barbell. Take a narrow grip. Get your partners to lift the weight overhead to arms’ length. From here, lower the barbell a couple of inches then press it out to arms’ length again. The partners should stand by in case you are unable to control the weight. A good gauge of the poundage to be used is to take a weight you can just get three bench presses our of. Press this weight out the two or three inches you lower it . . . start off with 3 sets of 5 reps, increasing to 3 sets of 8 reps before adding poundage and dropping the reps back to 5. Don’t forget the massage of the triceps.