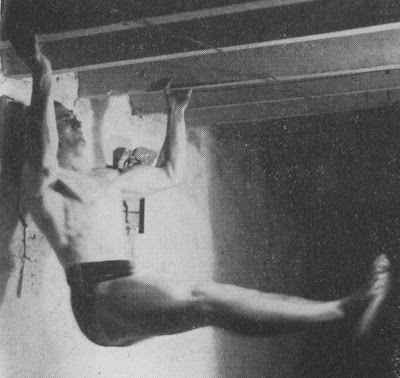 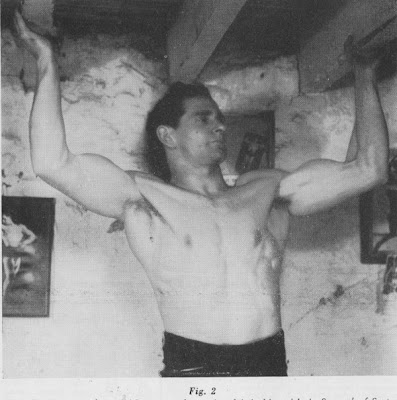 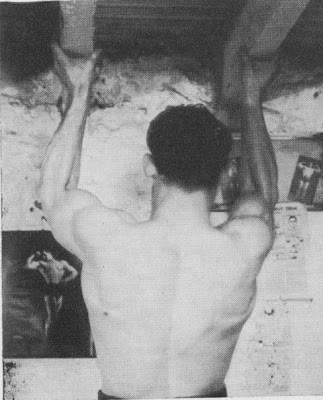 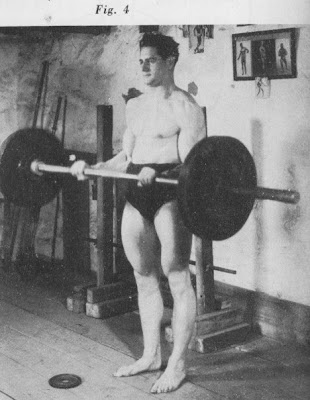 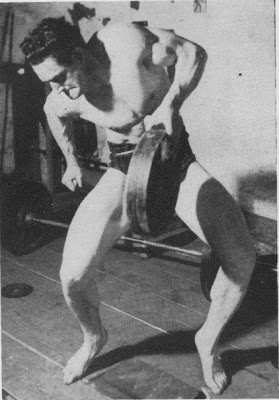 Finding a point from which to get under way with this little yarn puts me very much in sympathy with the hungry tenement urchin who ran across a roof and plunged through a skylight – ker-plunk into the stockroom of a candy store. In other words, I hardly know where to begin, for in the history of young Al Berger, Philadelphia husky, we have a combination of strictly first-class “success story” with “iron pills” training, the privilege of relating the history of a good personal friend, and a recital of his unusual ability in grip chinning with his extremely powerful hands. Being on the inside in this strong hand business myself, I appreciate even more than does the garden variety of strong man the unusual ability of friend Al in his own pet field. It is a fact that others have done this type of work, yet their number is very few. In all of my own 22 years of active interest in the game, and in my backtracking for another score of years, I have found very rare mention of this feat of grip-chinning, and had never seen a personal demonstration or even a photo of the work until about a year ago when Al showed his wares one night on the rafters in my cellar.

Back in 1919 or so Calvert mentioned grip chinning in one of his articles (Physical Culture, July, 1919, I believe, without taking time to check) and Charles McMahon mentioned it in his article in Strength of September, 1927; again, Gord Venables, in his Strength & Health article of August, 1939, mentioned Joe Regnier of chinning with 30 lbs. on a couple of two-inch rafters. These three instances, boyzangirls, are the sum and total of references I have found to the gentle pastime of suspending oneself from a couple of rafters by grip strength alone. Just last night, while Al was over to “censor” the photos and give final dope for this little article, I talked to friend McMahon and pumped him for full details on his reference to the work. “Back in the summer of 1913,” he said, “while I was working out in with Matysek and Henry Sincosky, we got to where we could chin on rafters about 18 inches apart. Henry – he weighed about 175 and had very heavy hands with short, thick fingers – could actually walk along five or six feet by chinning halfway, giving a kick and hitch with his legs and arms, and moving one hand ahead a few inches. He’s the only one I ever heard of who could do that stunt,” he finished. (Note to the oldtimers: Chas. has been out of the P. C. game for about eight years, but he still keeps in very good shape, and finds the time spend at exercise a quarter of a century ago to be paying him big dividends in health and fitness to enable him to do a better job on his present work.)

Just when I first bumped into brother Al Berger it would be hard to say – probably eight or nine years ago, though, at one of the old Milo strength shows, for he has been a fixture around lifting events for a good many seasons. That is about all anyone thought he was too, until a few months ago when we got his shirt off him down at the South Philadelphia W. L. Club one Sunday afternoon, and the boys saw that he had puh-lenty under it. Since then Al has eased out of his shell a bit, and is appearing occasionally in public – he still wants to hide his light, though, until he gains even more development and definition. This we think is a matter of entirely too much modesty or conservatism, or both, for he has plenty on the old ball right now – both in development and in strength. Weighing 193 at a half inch under six feet in height, he presses 250, snatches almost as much, and jerks around 300, all without much practice at the lifts or attention to form. His real interest, he emphasizes, is body building. In this direction his results speak for themselves, as witness his likeness on the cover of the last issue of this magazine. I might say further in his behalf that he has done very little posing or muscle control practice.

Al’s measurements, taken cold, are impressive, and his proportions are not on the massive order, but are more nearly what we are coming to accept as the American ideal – about halfway from “average” or Apollo to Hercules. The included photos do not show his physique to its best, they are not posed for display.

It was just ten years ago that scrawny young Al Berger, weighing all of 116 lbs. after meals, became inspired upon seeing a photo of Bill Lilly in Strength magazine. So he hied himself home and rugged up a contraption with a bar of sorts and some rocks and cement blocks for weights. It was by no means closely adjustable or highly inviting, but he nonetheless fought along with this makeshift for a couple of years, meanwhile adding thirteen pounds to the burden on his shoes. He also managed to scare up about $12.00, and so in September of 1933 he hied himself around on to the “emporium de ” and bought his first bar bell – a 100-pounder with a hollow pipe bar. Not a fancy set – but many another champion has begun on the same type of outfit!

The rest of his story is the normal success chronicle. He added a few plate here, a few more again, a new bar – and now he has something like a ton of equipment, including a York Olympic outfit. The Berger cellar (Al is still single, lives at home, and operates with his father a general contracting business) is mostly Berger gym, and a fair idea of it can be gained from studying the background in the accompanying illustrations. Nor is this by any means a private gym, for Al generally has plenty of company tossing the weights around. Many indeed are the young bucks in the neighborhood who owe their start on the road to health, strength and better living to the example and teaching of this chap Berger. The night I visited him with my cameras two boys were on hand – John Hall and Dan Gates – and just last night when he came around to check up on me he had a little helper along. This was Bill Fischer, whom Al started in the right direction a couple of years ago; Bill got good results, meaning a man-sized arm and a barrel of a chest, with accessories to match. Incidentally, Dave Mayor, former heavyweight lifting champion, is another of the gang who know all the tricky steps on the Berger stairs.

Al, as I have said, is concerned first and last with body building, so his training reflects this interest. His regular program now consists of 2 sets of 10 repetitions each of the standing lateral raise, criss-cross, and curl, plus the same schedule or rowing exercise, pullovers while on a 6¼” high box, squats, and calf exercise. In the press he does 2 x 5 with 210 lbs. and subsequently does a special press program of 200 x 4, 215 x 3 and 230 x 2.

While not greatly concerned with lifting marks, he has hung up some nice numbers here and there, such as pullover with 155, reverse curl with 150, and lateral raise on a box with 55 lbs. in each hand.

BUT IT IS HIS GRIPPING STRENGTH THAT GETS ME, and I mean really! Oddly enough, his hands are not particularly impressive in shape or size – 8½ inches from heel to end of middle finger, 10 inches spread from thumb to little finger, middle finger is 2 7/8 inches around. Fingers are on the long and slenderish side, and his hands are decidedly not of the thick, “ham” appearance. Indeed, they are very similar to my own, and just about the right amount larger in proportion to Al’s 30 lbs. greater weight. But how they fool you when he starts grabbing!

It was about five years ago when a friend of his, Carl Crawford, first asked him to try grip chinning, and he succeeded right off the bat. Oddly enough, he never considered it of much interest, and did not practice to any extent excepting for a short period about a year ago. At that time his best was to hang a couple of seconds with both hands from one rafter, and I am sure that he could have duplicated Sincosky’s walking had he tried at that time. (For that matter, I rather think he could do it right now, with no practice for the past several months; it is really amazing to see a big bruiser of nearly 200 lbs. do this grip chinning trick at all, much less as easily a Al puts it across.) He has held the position shown in Figure 1 with a 25 lb. plate on his insteps, has chinned once with 43 lbs. (a kettlebell) on his feet, and 6 times with ten pounds. Twelve reps have been done with bodyweight alone. To get up there, he either reaches up and grasps, or else jumps up and hangs on! Just like that. He prefers 3-inch rafters about 30 inches apart, as in Figures 1 and 2, but can make out handsomely at 15 inches spacing, as in figure 3 (in which the rafter in the right hand is 2 5/8 inches thick). They are rough sawed, not planed, and are true-sided, not wedge-shaped. A coat of whitewash helps slick up the rough surface, and Al uses a bit of floor dust to give friction. I assure you that in Figures 1 and 2 he is in the act of chinning, with his feet off the floor – in spite of the unconcerned expression in number 2.

Another type of gripping work is the picking up of heavy objects, such as thick plates, etc. Al’s best in this direction is to clean a 75 lb. Milo plate (one inch thick, flat, smooth sides – no groove) in each hand, or a pair of York Olympic 35 pounders in one hand, flat sides to the outside, as in Figure 5. He gets them to the point shown, then dips beneath them in the usual cleaning technique, and I might add that the old boy is really giving it all out in this synchronized flash shot – the last one of the evening, after he had done many other gripping stunts and worn a blister on his left thumb.

He says an inch is about the best thickness for this type of work – and has a mark of picking up a 75 with ten additional pounds attached (on a short dumbell bar through the center). I even hazard the opinion that if he would really work on it a bit he could duplicate the great Arthur Saxon’s feat of snatching a heavy plank – about 2” thick and about 200 lbs. in weight – in approved snatch style. I am certain that he could right now handle a similar lift of the same proportion to his bodyweight as Saxon’s was to his – about 175 lbs. for Al.

But, as been said a couple of times, Al is more concerned with body building than with competition or feats, so he just hauls up to a grip chin every once in a while to see whether he has forgotten how. Let me emphasize, as you examine these photos, that they were the first serious attempts he had made for almost a year – yet he was good enough to sail right through them without the use of synchronized flash photography on anything except the cleans. But that’s the kind of guy he is – hard worker, sincere lifter, and a good sport – and we’ll be hearing a good bit more of him in the near future.