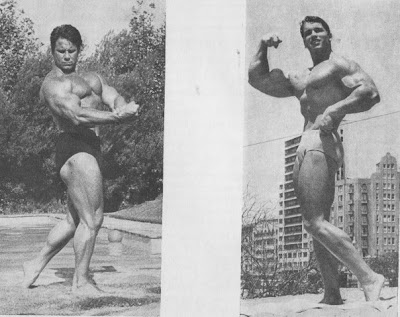 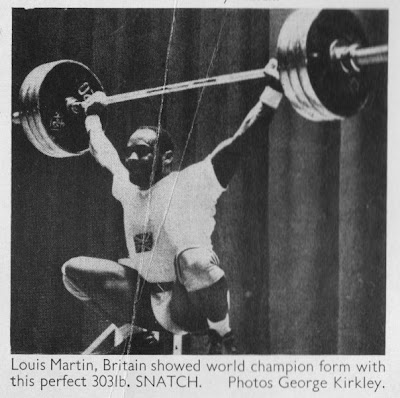 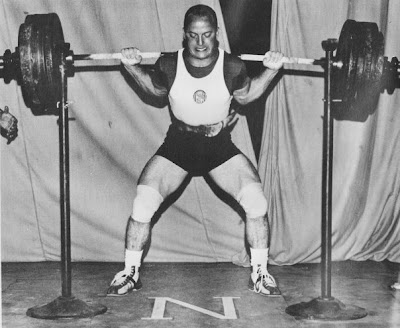 I happen to believe that Reg Park is the best example and single representative of what proper training with weights can do for a man. He's got everything: huge, almost superhuman muscles, the strength of the most powerful competitive lifter, and the perfect, well-balanced physique that one sees on Greek statues in museums. Whether or not you agree that Park is the Greatest -- if you've seen him, then you've GOT to admit that he's good, to say the very least. OK. so who cares about my opinion anyway, and what in heck does this have to do with how you can get the Herculean build you're after?

The best physiques (and Park's is one of 'em), were all built by hard work on the basic, heavy duty exercises. There are NO exceptions to this statement. Even easy-gainers who (like Park) build up very easily, never get to the Hercules stage without the ultimate in effort. Park worked up to squats with 600 pounds, behind the neck presses with 300 pounds, and bench presses with 500 pounds! Hereditary advantages or not, Park sweated blood to earn the massive excellent physique that he has. And so did every other human Superman whose muscles aren't merely bloated, pumped-up tissue. The problem of WHAT these basic exercisers are, and HOW HARD one must work on them for satisfactory, or even startling results, is one that every bodybuilder, at one time or another during his career, is confronted with. This month we're going to solve the problem.

To begin, let's sift through the thousands of possible exercises, and variations of exercises that confront every barbell man, and set down a principle by which the trainee can determine the BEST among them; those upon which he should be concentrating his best efforts. Here's the principle: An exercise is worthwhile if it allows you to use very heavy weights -- brings into play the BIG muscle groups -- and causes lots of puffing and panting.

From the simple formula stated above, it is quite easy to see that fully eighty or ninety percent of the exercises followed by most barbell trainees do not come up to the standards required for maximum physical development. Concentration curls, Hack squats, lateral raises, thigh extensions, triceps "kickback" movements, etc., all followed slavishly by thousands of misinformed bodybuilders, are a waste of time. My very bitter apologies to the high-pressure ad-men, and the authors of all the super Space-age courses, but their stuff is strictly from hunger. If you've been sucked into following any such routines, drop 'em! In all honesty, fellows, that garbage won't do a thing for you, aside from bringing discouragement and disillusionment. Save your time and money, and put your effort into THESE exercises:

In essence, those are the exercises that you ought to be killing yourself on. We're concerned with the development of SIZE, POWER and SHAPELY BULK, so we've eliminated all supplementary abdominal and calf work. This you can do at your leisure, or you can omit it entirely, with no consequences to your overall development. The stuff we've enumerated above is what you need in order to turn yourself into a Human Hercules. And, lest you believe that this writer has a vested interest in this, let me say that he HAS. I derive personal, private, selfish satisfaction pushing the truth about sensible barbell training, and seeing those guys who are willing to work for their goals, achieving the builds they desire. The muscle heads, the "muscle-spinners," the drug-takers, etc, are no concern of mine. They can go their own way; I'm concerned about the rest of you.

Honest muscles, like honest men, are rare. But they can be attained, and the only way to do it is through HARD, HARD work, and an honest approach to training programs. So if you're willing, you can get the physique you're after; if you train as I have discussed on the Basic Movements.

There are reasons why these basic exercises are best. Let's talk about them.

It isn't generally understood, but the easiest way to build the small muscle groups is by exercise on the big ones! For example, it's impossible to build a broad, powerful back, and thick pectorals, along with terrific shoulders via the heavy cleaning, pressing, rowing and bench work that I advocate, without building enormous arm size and strength. You couldn't do it if you wanted to! Yet, aside from weight-gaining, building big arms is a giant headache for most barbell men. How simple a matter it would become if only they would forget about the ridiculous pumping, cramping and spinning-type isolation exercises, and just train hard on the basics! The big arms would come naturally.

John Grimek once had arms that taped close to 19". They were so big and powerful that they didn't look real! Grimek at the time was an Olympic weight-lifting contender, and he had trained for a long period without doing a single curl or triceps "pumper." His big arms got the way they did from the Heavy Lifting Training. You can do the same by working hard and heavy. And you don't have to enter Olympic competition!

The trapezius and neck muscles are impressive and too often neglected by many weight-trainees. But your traps will grow like crazy if you push your cleans hard, and if you get your presses up to really impressive standards.

Forearms - "stubborn forearms" will respond like obedient, trained seals to heavy rowing, cleaning and pressing. And just try to keep your grip on a super heavy barbell while doing a set of stiff-leg deadlifts, without forcing the forearm muscles to ache and grow beyond belief!

Heavy squatting will build heavier calves. Sounds impossible? Well, just try working your squats like you're supposed to, and you'll see your calves begin to grow no matter how they've refused to respond to toe raises.

Power cleans are fine for the calf muscles too. Incredible as this statement may sound, it's absolutely true. The coordinated effort of leg and back movement in heavy cleaning DOES work the calves! Try it for a few months and find out for yourself.

Nobody wants to be fat around the middle. Yet, unless you're drastically overweight, you don't need more than one set of one abdominal exercise (done in high reps, with resistance) to keep a rock-hard, muscular mid-section. The hard work on squatting, cleaning, and ALL heavy exercises will inevitably keep you trim and hard. And make no mistake about this: you are far, far better off with a thick, powerful waist than you are with a "wasp-waist pretty body." A man should be BIG. He should be strong and powerful. And he can't be if he tries to blow his biceps up to 20" and keep his waist down to 30". Use your head! If there are any real supermen around who have waistlines below 33" or 34", then they've got 'em only because they're SHORT, and, the small waist is proportionate tot he rest of their husky muscles.

Training on the big exercises builds HEALTH and LASTING muscle size. These two factors are very important. Today, men like John Grimek, Reg Park, Bill Pearl, and another lesser-known Hercules, Maurice Jones of Canada, all possess builds and physical power comparable to that which they had during their prime. The reason? They built REAL MUSCLE, Sig Klein must be around seventy, yet he's got the build of a twenty-five year old athlete. The reason? He built REAL MUSCLE. The same holds for scores of others in the weight game who got their physical development by hard, hard work with heavy weights on the best exercises.

If you're a young man now, then you're probably more interested in what you can look like on a posing platform, and in how fast you can get piles of muscle - but don't, no matter how great the temptation for an "easy way out" via pumping routines or muscle drugs, follow any system of training except the good, heavy, teeth-gritting type routines that build pure, strong, big muscles. I say this as a sincere warning against charlatans who would rob you of your money and your health - and do it gladly - to sell you on their own private "miracle systems' or methods'. Keep clear of them, and remember, please, that you've got a long life ahead of you after any physique competitions you might enter or win within the next few years. You want health, well-being AND big muscles that will stay with you for the rest of your life. You will only get them if you train HARD and HEAVY!

Here's a sample program that you can follow. It will give you every desirable physical quality. IF you work to your limit on it.
Warm up with one set of twenty prone hyperextensions.
Do two progressively heavier warm up sets in the squat, using five reps in each set. Then load on weight until the bar bends, and do three sets of five reps each with this limit poundage. Push! Fight! Drive! The SQUAT is the builder of SUPERMEN!
Go to your flat bench and do two warm up sets, as you did for your squats, of five reps each in the bench press. Then do a final 3 sets with all the weight you can properly handle. In this, and in every other exercise in the program, REST WELL BETWEEN SETS!
Now do power cleans, stiff--legged dead lifts, or barbell bendovers. Same sets., same reps and the same forced poundage attempts as in the preceding exercises. Your lower back is a vital body area. Turn it into a SUPER POWER ZONE by intensive back work!
Do heavy, bent-over barbell rowing. Two warm up sets - then three limit sets - five reps in each set you do. Reg Park (I always seem to come back to mentioning him, don't I!) used this exercise along with the power clean in order to build the unbelievable back that he possesses. He considers this bent-over rowing exercise the best single upper back movement a man can do.
Do some form of HEAVY pressing. If you read my stuff then you already know that I practically sneer at any shoulder exercise but the press behind the neck! But of course you can old military barbell presses, dumbbell presses, or any form of heavy seated pressing with excellent results sure to follow - IF YOU WORK HARD. Same set-rep scheme for your pressing as for the other exercises, and a tip: May guys have complained to me that I don't understand (a-hem!) their difficulties when it comes to heavy pressing behind the neck. It seems that the effort of cleaning the bar up and behind their necks before each set tires their poor little bodies out. What to do? Do your presses right off the squat racks! Load the bar up. Get set comfortably under it. Get a good, solid grip on the bar and set your feet firmly. Now go to it. Press the weight right off the racks. Then, after each set, return the bar to the squat racks. Simple? you'll get wonderful results this way - since you'll be saving your energy and concentration exclusively for the pressing action, and all of the work will be thrown directly on your deltoids...so, better and bigger muscles!
End your workout with an abdominal exercise. Do any one that you happen to like. I prefer leg raises off the end of a flat bench, with iron boots on my feet, but it's really only a personal preference, and you can work your midsection with any 'ab" exercise that you happen to like. Just do one set, and run the reps at around twenty or thirty.

Do that routine - or a similar one - as described in this article, and your muscles will bulge through your clothing after a year or so of training!

The watchwords are BASIC EXERCISES and HARD WORK. Remember them when you walk into the gym next time. You'll be grateful for the rest of your life that you did!