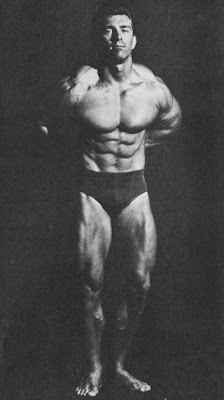 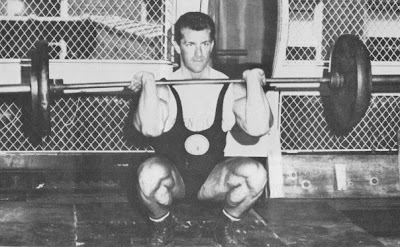 P.H.A. in Weightlifting
by Bob Gajda

Weightlifters and coaches throughout the world have written to me in the past in regards to my P.H.A. (Peripheral Heart Action) philosophy, but no one thought you could incorporate the its principles toward weightlifting. Let me say that the results have not only been rewarding in every case, but also a completely new psychological change takes place.

While I was in East Berlin during the World Championships, I discovered that something was wrong with out own national weightlifters in contrast with the Iron Curtain lifters. I found that our lifters had four decisive physical weaknesses. These were:
(1) lack of endurance.
(2) lack of flexibility.
(3) speed.
(4) poor muscular development.
I have always told the public that the P.H.A. philosophy of training is the total program for complete physical fitness. By total, I mean strength, endurance, flexibility, muscular development and psychological motivation. This fifth attribute is very important and P.H.A develops it to a point no other previous systems could ever hope to attain. The person who sticks with this advanced P.H.A. program develops that drive and perseverance which makes world champions. When you use this system you keep going where others fail or give up; it gives you the added drive so necessary for that last lift in a meet.


THE VALUE OF P.H.A. TRAINING IN WEIGHTLIFTING

First, the P.H.A. system of training allows for a greater work load. Second, it gives one a recuperative buffer in case of an injury; due to the implementation of the secondary heart action. Third, it builds stamina because of the continuous circulation of the blood. Fourth, it alleviates boredom by proving itself to be not only good for the sport of weightlifting but also of the secondary goal of total physical fitness. This system incorporates five of the most important types of exercise using weights and then free style. They are:
(1) a basic strength exercise.
(2) a circulation exercise, the key being the abdominals.
(3) motor pathways, that is, working for style with a light weight.
(4) flexibility.
(5) secondary bodybuilding working on the muscle stabilizers.

This is my program and the one that Duncan YMCA weightlifters follow. It is divided into three parts. Monday, Wednesday and Friday routines are done the same way, and Tuesday and Thursday are also repeated. On Saturday you go for a total of the three Olympic lifts. One can see from the start that this is a six-day-a-week program and not intended for the person just beginning to train with weights. There are three phases to each workout and you go right from one to the next until you are finished. That means
NO RESTING BETWEEN ROUTINES!

On Tuesdays and Fridays:
¼ mile wind sprints before attempting workout.

Go through one set of each exercise in a given sequence and then go back and begin at the first set of that sequence again. After all sets of Sequence I are completed, follow the same procedure through Sequence II and finally Sequence III. For example, in Sequence I of the M-W-F program, do one set of Back Squats, then a set of Reverse Curls, Crunch Situps and Olympic Presses. Now go back and do the second set of Back Squats, Reverse Curls, and so forth. Work toward NO RESTS BETWEEN SETS OR SEQUENCES other than the time it takes to make weight changes.


NOTE – This program has been developed for my own individual weaknesses such as strength in the legs and lack of flexibility. You may substitute exercises in an area that you are poor in, however, keep the general format of the routine and keep running. As your conditioning improves, challenge yourself to lift bigger poundages in the strength (first) exercise of each sequence. If you push yourself and persevere, in a short time you will notice a very different you.