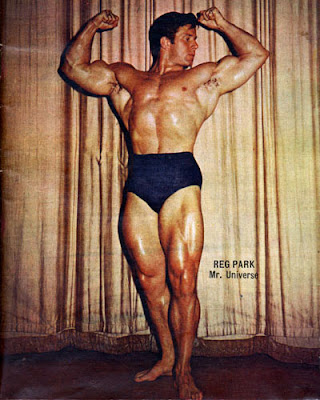 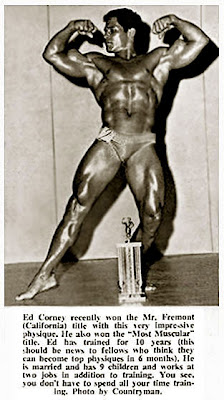 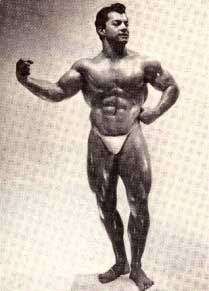 Much confusion exists on the function of the mind in weight-lifting and body building, and the old truism that “you can if you think you can” has been worn pretty threadbare. Notwithstanding the many successes of the mere effort of superb will in the face of difficulties, I always feel inclined to debunk the “You can . . .” fraternity by pointing out the mental homes are full of people who “think” they can do something or other or that they ARE somebody or other.


Muscle-growth proceeds from muscle-contraction, admittedly, but muscle contractions are actuated by the brain. It is a sobering thought that even the “pec-happy” moron, sweating in the corner with marathon dips, is accomplishing some form of cerebral activity with every dip!

In fact, as cerebral activity controls even the actions of our more or less involuntary muscles (through motor sections of the brain) it becomes increasingly obvious that physical exercise aids the healthy brain and that the right mental activity is going to help physical activity. In fact I am of the opinion that most physical culturists follow a cultural development which is the exact opposite of my own “Pilgrim’s Progress.”

Your Uncle started off in life as a substandard bronchial specimen with a distinct aversion to the athletic pursuits that were compulsory at school. I differed only from the despised bookworm of schoolboy tales by the fact that I did not wear thick-lensed glasses, though I DID like bird-nesting. At about 17 years of age, Darwin’s “Origin of the Species” had proved such a fascinating book that I naturally looked for another book with a similar title and of equally huge proportions, in the same block of bookshelves in the Northampton Public Library.

By a remarkable stroke of good fortune I picked up “Life is Movement” by Eugene Sandow and, although I was still a little piqued to find it was not primarily a book on evolution, it did capture my enthusiasm as it promised freedom from my perennial bronchial pneumonia and my love of beauty was satisfied by the discovery that the Greek Gods of Classical sculpture could be emulated by modern man. Shortly after that, via the old “Superman” magazine, I was to meet a Greek God of reality in Northampton-shires’ own magnificent Harold Laurance. This was a doubly fortunate meeting because Harold educated me out of the folly of light dumbell exercises and into the wisdom of weights at an early age and was sufficiently well-educated and lighthearted to convince me it was possible to be strong, well-built and intelligent, without losing one’s sense of humor or any of the human graces that make a civilized man.

I think most weight-lifters take the journey to being a complete man by the reverse route. They start off by wanting to be strong and well-built and then find their interests expanding to include art, literature and music. In short, the mental activity of building muscle and strength stimulates the brain to further activity.

So far, I have been telling you about the brain but the brain is only the organ of the Will and (I know this is going to cause some dissention) the Will is the servant of the Emotions. This, of course, is where the Pep-talker comes in, for it is the function of people like Earle Liederman, Fred Tilney and myself to appeal to your emotions (of which Logic is perhaps the strongest in the thinking man) in such a manner that you will persevere with your workouts until the emotional desire to be strong and symmetrical is satisfied.

For, although the brain and will can produce marvelous results, the energy they create must be used rationally to obtain success. The mere – “I can if I think I can” attitude will lead to disaster unless the Will is directed to the correct channels.

Most writers dangle World Championships and fame in front of the aspiring reader’s nose as a reward, but I prefer to appeal to your emotions of Logic. As I said in “Body Culture” magazine last year, “The desire to be Logical is an Emotional Desire.” The feeling of mental orderliness and tidy reasoning is as pleasurable to the sense of propriety as clean sheets are to the skin.

Physical training is as much a form of mental discipline as one of physical discipline. The steady adherence to a particular programme requires just as much an effort of the brain as the muscle – that is why ne’er do wells and social delinquents are never found among the keen members of a weight-lifting club and that is also why governments would be better to spend money building gymnasiums and swimming pools rather than expanding the jail system. For once the social delinquent becomes interested in physical training his previous vicious life loses its attraction for him.

In fact the only thing that can be said in defense of the advertisements of some Physical Culture consultants who often appeal to the lowest instincts in human nature – revenge and vanity – is that once the naive pupil undertakes any form of exercise for the mundane object of punching a rival on the nose or to swagger on the beach, he will most likely in a short time realize how puny his original ambition was and what greater prizes lie before him.

For regular exercise with weights opens a vista of possibilities to the newcomer too numerous to detail fully. With his new vibrant health and strength he will bound along, seeking to help and do good rather than wreak havoc. As a class of athletes, weight-lifters are notorious for their good nature, amiability and helpfulness. There is a reason for this – most aggressiveness results from feelings of inferiority and mistaken values as to what constitutes right and wrong.

The natural result of this is, he is immune to the sneers of those who are unable to judge his worth – and whatever poundage he is lifting places his position so precisely that he cannot convince himself that he is better than he really is. Further, he soon comes to realize that physical prowess is only one aspect of life and although the pugnacious may think the man with the biggest punch has won an argument – no one ever suggests that them man who lifts the most weight has ever proved anything else but that he is the strongest. Such is the usual result of weight-lifting on the mind – one thinks more clearly and one tends to have a better judgment of values.

How can the brain help the lifter and body-builder? Mainly, of course, by willing the pupil to train regularly and think clearly about the type of exercise he should do to progress. The person who has adequate intelligence will also avoid excess of unhealthy indulgences and (just as important) EXCESS OF TRAINING ITSELF. The brain should also be able to recognize beauty of form and symmetry and thus prevent the trainee from a disproportionate development. The reasonable man will also note the fallacy of doing only the exercises which he finds easiest and will endeavor to improve his performance on such movements in which he lacks skill or strength.

To my mind, however, the two most important ways in which an attitude of mind is most helpful is in the definite limiting of IMMEDIATE objectives and in the maintaining of a cheerful, balanced attitude to the game as a whole.

You must use your brain to control that feather-brained habit of wishful thinking in which you aim to slam 50 lbs. on your press in three months – or gain 2” on each arm in a similarly short period of time. There should, of course, be no limit to your ULTIMATE objective, but adherence to a poundage progression laid down by the designer of a particular course or action will prevent you from the disillusionment which the over-ambitious are constantly encountering.

At the same time that you are discarding pipe-dreams you should will yourself to getting the utmost fun out of your training. It certainly sounds funny to ask you to “will” enjoyment – but it CAN be done. First, you must concentrate on the CORRECT performance of the exercise itself – the more dexterity required, the greater is the joy of clean and precise movement. Snatching is one of the happiest of movements and those who have never experienced the thrill of a well-executed Snatch are the mere cart-horses of weight-lifting.

Another source of enjoyment is the elevation of really prodigious poundages. To Dead Lift a record poundage is one of the most satisfactory triumphs the body can achieve – when you put the weight down you’re practically airborne!

Weight-training is a game and like all other games THE MANNER OF PLAYING supplies the fun and not the mere victory. If you are not happy at your training, if you do not look forward to the weights at night, if you do not walk away from the gym uplifted and refreshed – then you have the wrong attitude and your gains will be affected by it.

Get an enthusiasm about snatching, cultivate a pride in pressing, generate geniality with your jerk, bang on the weights for the dead lift and beam happily on the bench. Don’t be squeamish about squats and don’t drip tears over your dips. Use your brain to get fun out of the game. If you don’t enjoy it, only you are to blame. Brother, that’s bad poetry.

This article has just touched on the fringe of the subject but I do hope it has convinced you that weight-training is NOT just mechanical drudgery. This is a game in which the remedies are food, sweat and laughter AND NOT blood, sweat and tears.

And perhaps laughter is actually the main ingredient.

It certainly helps you digest the other two.