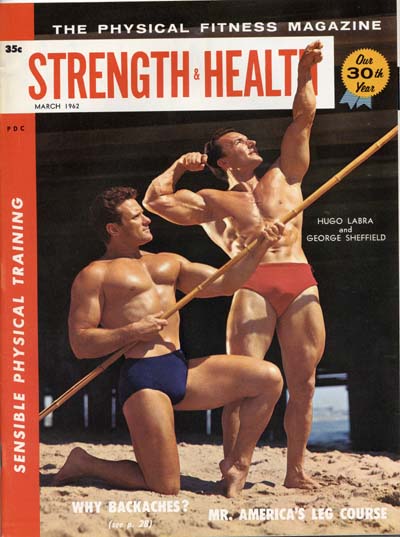 A decade-and-a-half of employment at the York Barbell Company has allowed me a number of encounters and experiences which most dyed in the wool barbell enthusiasts would deem as priceless. Significant, too, is that most of these contacts involved notables from a variety of Iron Game eras, thereby exposing me to a clear-cut diversity of opinion regarding all aspects of meaningful progressive resistance.

My greatest single, and sustained learning experience pertaining to the ins and outs of making serious might and muscle gains came from a fellow employee back in the 1970s – Mr. America (1963) Vern Weaver. Fortunately for me, Vern was of a mind to go on a training spree and he required a training partner. He tended to attack the weights, more or less, in spasms even while in the midst of his competitive bodybuilding career. So, every Monday, Tuesday, Thursday and Friday for a 4-month period back in the very early days of my time at York Barbell, Vern and I spent our lunch hours beating our bodies instead of feeding our faces.

In the interest of complete disclosure I had to be quite a comedown as a training partner for Vern, as he’d worked with the elite from the Olympic lifting and bodybuilding worlds on both coasts here in the States during his heyday. Nevertheless, his invitation provided the ultimate fantasy fulfillment for a young musclehead like myself – training side by side with a very accomplished physiqueman (As well as a Mr. America, Vern was also a class runner up in at least two of the NABBA Mr. Universe shows during the 1960s). Plus, few people remember, but Vern had an excellent track record a competitive Olympic lifter as well.

In Vern’s era it was not uncommon for a weight man to give a good account of himself at both endeavors, and do it at the same show! Furthermore, when you represented York Barbell, as Vern did back in those days, proficiency was sort of a prerequisite.

Because he was the expert, Vern naturally dictated the terms and conditions or our workouts together. Fortuitously for me, again, as we progressed he passed along much of his personal trial and error determinations, empirical observations and anecdotes which comprised his back of training knowledge.

Incidentally, Vern’s self-experimental “findings” largely mirror the general training practices of his generation, which were distinctive in many ways from, but undeniably built upon, the prevailing practices of the preceding generation of musclemen. Hence, what follows as “Weaverisms” can also be rightfully construed as “period” information. At the same time though, it should also be recognized that Vern exhibited considerable originality in determining what worked for him.

Certain Iron Game instructors of note developed a training slogan of sorts which encapsulated their particular approach to working out. For example, the late and great strongman/poser Sig Klein became identified with the phrase, “Train for shape and strength will follow.” Be comparison, Vern’s favorite expression to sum up the successful bodybuilding experience was, “To get big muscles, lift big weights.”

On this point he was very much a traditionalist, equating pure muscle building with pure strength training on standard bodybuilding exercises, albeit conducted at slightly higher repetitions than commonly employed by competitive lifters. Yes, he acknowledged giving the other “school” of bodybuilding thought a whirl briefly – the strict pump up approach with set after set of medium/light weights and hour upon hour of training. This style worked for some – one of whom was a friend of Vern’s from named George Sheffield, who acquired a national calibre physique and appeared on the cover of Strength & Health magazine. However, it left Vern flattened out physically and mentally, and with less muscle to show for it. This occurrence proved conclusively to Vern that he required heavy stimulation in order to build heavy, high-quality muscle.

This obviously brings our discussion to the matter of sets and reps. Vern was of the belief that 6 sets of 6 reps were unsurpassed for stimulating size and power gains. Of course, he had tried long established patterns like 3 sets of 10 and the 10-8-6-4-2 routine, or some affectation of it, and gotten noticeable results. However, as he pushed his bodybuilding endeavors to the national level, Vern found that 6 sets of 6 reps put him “over the top,” so to speak, allowing him to reach what he felt was the apex of his musclebuilding potential.

So, naturally, when Vern and I performed our lunchtime workouts we did 6x6 on all the exercises we did for the entire program – four of them. Mondays and Thursdays were upper body days, which meant we did decline bench presses and chins. Tuesdays and Fridays we spent our hour laboring on squats from a parallel position in the power rack, and high pulls. That was all we did – ultra-abbreviated training.

To clarify further, Vern’s version of 6x6 was not five successively heavier warmup sets in preparation for the best set, weightwise, of 6 reps for the day. We did a couple of preparation sets with easy weights and then moved to a fixed “working weight” for 6 sets of 6 reps. For example, if we were using 250 lbs. in a particular exercise, we’d take 135 for several reps, then something in the vicinity of 185-205 for 3-5 reps and then move on to 250 for the 6x6.

Throughout most workouts, we couldn’t get 6 reps on all 6 sets with the fixed poundage. Typically, we got 6 reps of the first 3 or 4 sets and then had to settle for 4 or 5 reps on the last 2 or 3 sets. Like any other set/rep pattern you stayed with it until you reached the goal figures and then increased weight. So, when you got all 36 reps with a poundage you knew it was time to up the weight 10 or 15 pounds, depending on which exercise it was.

Short rest periods between sets, though, kept the overall intensity of the particular exercise higher than you’d expect. Frankly, it’s not realistic to expect all 6 sets in a system like this to be all-out. If they were, they would quickly become self-defeating. But if one doesn’t dawdle between sets, each is taxing enough to be challenging.

To Vern’s way of thinking, this set/rep system had the virtues of taxing the involved muscles with the heaviest possible poundages – short of dropping down into very low reps with correspondingly increased weight thereby greatly upping one’s susceptibility to injury – while simultaneously supplying enough of a workload to provide the muscles with something of a pump.

One fine point pertaining to execution with this system – Vern tended to favor rest periods between sets of 1½ to 2 minutes in duration. Anything over 3 minutes was deemed unnecessary in his book.

If you review the published routines of bodybuilding champions from the post World War II to mid-1960s you’ll find that multiple sets of relatively heavy weights for 6-8 reps was fairly common among many of the big names. Among the luminaries who immediately come to mind are Bill Pearl, Reg Park and Marvin , to name a few.

Getting back to my gym binge with Vern – I just assumed that we only pursued four movements because of the considerable workload devoted to each and our 60-minute time constraint. However, I was informed that while our splitting the routine was a concession to time the limited choice of exercises was not.

This brings me to a point I wish to make. Those of us who have more desire for muscle size and strength than we have innate ability to obtain often harbor a certain amount of envy toward those who are blessed with superior genetics, feeling that all they have to do is walk into a gym and look at the weights and their bodies magically transform.

While the “physically advantaged” clearly have an easier time of it, without question, I’ve yet to encounter a physique luminary who didn’t have at least one formidable obstacle to overcome.

Vern had two hurdles. One was calves. But a more significant one in terms of his overall bodybuilding success was an inability to gain muscular bodyweight over a certain point. From accounts of former training partners, Vern trained and gained strength like a demon. as his strength increased so did his muscular bodyweight, until he reached the 195 lb. mark or thereabouts, where he plateaued noticeably. Even in the late 1950s and early 60s, in order to challenge for the Mr. America crown, Vern knew he would have to gain another 15-20 lbs. of rock-solid muscle. In effect, Vern had symptoms of hardgainer traits, although they didn’t surface until he was well along.

He responded by consolidating his routines and focusing only on movements which yielded maximum return for the amount of energy invested. In brief, he pretty much stuck to the major muscle of compound joint movements when he was looking strictly to gain more mass. I make that differentiation because later, other training objectives will be touched on.

Of the aforementioned exercises we performed, I’m sure at least one of the choices raised a few eyebrows. Today, many trainees in the States view decline benching as an indispensable adjunct to “total chest training.” However, if memory serves me correctly Vern, more of less, happened upon it by accident several months immediately prior to his Mr. America victory. But his rewards from declines were so immediate and pronounced that he instantly became a staunch advocate of this angle over all others.

It goes without saying that over his years of training Vern had tried every imaginable form of barbell and dumbbell pressing at every conceivable angle. But he was always looking for the exercise which permitted him to apply the maximum possible poundage to a particular muscle group. In comparison to flat and incline bench pressing , the decline version filled this criteria. Furthermore, I believe he tried declines in the hope they would force new growth in his triceps, in particular, which did occur. Dramatic effects were noted in his deltoids and pectorals as well.

Needless to say, over time he fiddled with various hand spacings and lowering the bar to different points on his chest. Apparently, he settled on a moderately close grip – about the start of the knurling on an Olympic bar, and lowering it to the bottom of the sternum prior to pressing. I believe he also preferred a 30 degree decline angle or thereabouts. However, I recall the particular bench we used for pressing at that time being at about a 45 degree slope. Like Vern, my experience was that doing this exercise in the manner prescribed did stress the triceps, as well as the pecs and delts quite strenuously.

I might add in passing that had Vern been forced to abandon decline benching for any reason his alternative selection for a major upper body pressing movement would appear to have been parallel bar dips. Unlike declines, dips enjoyed great popularity among bodybuilders back then, being viewed as the ideal complement to Vern’s upper body pulling favorite, chins.

Indications were that he settled on dips and chins early in his training career, after receiving recommendations for this pairing from noted bodybuilders of that time who stopped off at the gym. According to one circulated story Vern once asked Hugo Labra, who possessed terrific muscular mass and definition for those days, which movements he thought were tops for the upper body. In his South American accent, Hugo replied, “Cheens and deeps!”