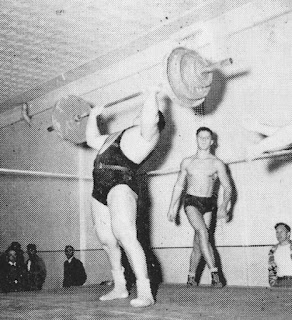 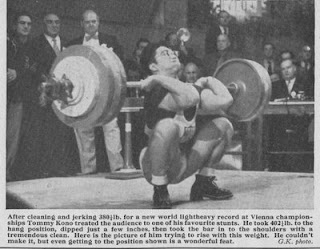 The Front Squat
by Doug Hepburn

Many top-notch lifters understood the importance of this fine power building exercise early in their careers. An outstanding exponent of the front squat is the famous Steve Reeves, who devoted much of his training time to performing this exercise.

From the standpoint of bodybuilding and the perfection of the physique, the greatest benefit derived by front squatting is that the muscles of the thighs receive the greater portion of the strain while the hips and buttocks remain in a secondary role. In short, the thighs are enlarged and the hips remain the same size.

Unfortunately, proper front squatting directs little strain on the lower back region; thus this vital portion of the body is relatively weak as compared with the thighs. When specializing on the front squat it is recommended to perform the regular squat and deadlifts (both bent- and stiff-legged). The incorporation of these two movements into the training routine will offset the unbalanced condition of strength between the thighs and lower back.

The advantage of front squatting is that the occurrence of back strain is minimized, as the upper should remain almost vertical. When squatting in normal fashion, especially when using heavy poundages, there is a tendency to bend forward during the upward phase of the movement, thereby directing pressure on the lower back. Also, because of this position o the upper body, the head can be forced downwards with the result that the blood is forced into this area.

Another point that will prove advantageous when front squatting is that the abdomen is not forced outwards as it is when squatting in the regular manner. This distension of the abdominal region, if allowed to continue over a period of time, will enlarge the midsection. This, of course, will not hinder the weightlifter but, unfortunately, could be detrimental to those who are interested in maintaining a small waistline.

As I have written this article primarily for the weightlifter, I will explain my views on how the front squat can assist those who are interested in increasing their squat cleaning efficiency.

Squatting is an absolute must for those training for body power. The weightlifter especially must devote a goodly portion of his training routine to this exercise. Those utilizing the squat method of cleaning or snatching should, in my opinion, direct more emphasis on front squatting.

There are several reasons for this. When front squatting, the lower body and the trunk are in the same general position as when actually cleaning or snatching. The poundages lifted will be well in excess of those actually cleaned. This will promote confidence and will aid when attempting a limit clean or snatch for a personal record or otherwise. Due to the fact that the poundage used when front squatting is greater than the weight lifted in a limit clean or snatch, there will be little difficulty arising after the weight has been fixed at the shoulders as in the clean, or overhead as in the snatch. This will also save much needed energy for the jerk.

It would not be wise to minimize the importance of the regular squat. This exercise is without a doubt the greatest bulk and power builder that we know of today. For this reason this exercise should be included in the training routine and performed immediately after the performance of the front squat and in the same workout period.

It is recommended to squat (both front and back) at least twice per week and the legs should be subjected to a thorough workout each time.

As well as a proper warmup, it is important that the stands are the correct height so that the bar can be removed without difficulty prior to front squatting.

Take your grip on the bar and make sure that the handspacing is identical to that of your clean. Remove the bar from the stands and then step back carefully three or four feet. Space the feet exactly as you would in the clean. Be sure that the elbows are well up so that the bar rests solidly on the shoulders. There should be little or no weight on the arms. The breath is to be taken immediately before assuming the low squat position. Exhale when the approximate three-quarter point of the erect position is attained in the upward phase of the front squat.

WARM UP, then perform five consecutive repetitions with a poundage that can be handled comfortably. Those who are front squatting for the first time will likely experience a slight discomfort in the region of the wrists. This will disappear as wrist flexibility is attained. In some cases this might take a few weeks, very often this initial discomfort will disappear after the initial warmup.

Increase the poundage so that three consecutive repetitions can be done without straining.

Increase poundage once more and then perform five sets of three repetitions. Stay with this poundage and strive to increase the number of sets each succeeding training period until eight sets of three consecutive repetitions can be done.