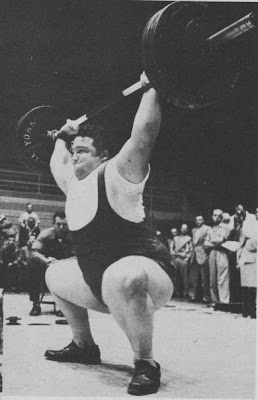 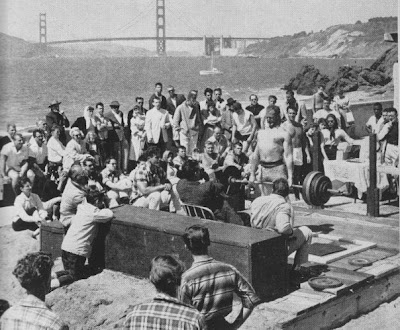 HOW I DEVELOPED MY PULLING POWER

Just as in the press, when I found I only pressing was not enough to develop my pressing power; my pull did not advance rapidly from just performing the snatch and clean. Not advancing the way I should soon taught me I needed some assistance exercises for the pull as well as the press. I was sure that selecting and developing these movements would be easy, but soon found otherwise.

The first one that came to mind was the dead lift. Before starting the dead lift I consulted several lifters and coaches. Most all of them, including John Davis, said the dead lift would be of no help in developing the snatch and the clean. Luckily, two things kept me from taking this well-intentioned advice. The first was contrary advice given by my friend, Bob Peoples, who holds the world record in the dead lift. The other was the fact that lifters like John Davis and Norbert Schemanski, who had very good pulling power, also excelled in the dead lift. On occasions I had heard of lifting 700 pounds in the dead lift and Schemanski more than 600 pounds. My thought was that maybe there was a connection between these lifts even if they had not recognized it.

So, with the belief that the dead lift would help my pulling power, I started doing many sets and reps in this heavy movement. To say the dead lift helped my pulling power is a gross understatement. My clean and snatch soared and for the first time in my 10 months of training I thought I could become an international lifter.

Although my pulling progress never slowed down after I started the dead lift, I was constantly in search of more helping movements, especially for my second pull. In this search I went through many of the well-known pulling exercises such as high pulls, upright rowing, one hand pull and continental cleans. I felt that all of these had helped my pull, but I still had not found the lift to do for my second pull what the dead lift had done for the first.

As I gave this problem more thought I realized the best second pull exercise I was then doing was a continental clean. The next thought that came to mind was to work into a heavier variation of the continental clean. Putting this idea to work, I tried using weights I was only able to pull high off of my continental belt. This seemed to work, but still was not exactly what I was looking for. Then I made the greatest discovery of my lifting career. To do this exercise I made a steel belt which I will describe in the following paragraph.

The belt was made of thin spring steel and shaped to fit my girth. In front there were two hooks, also of steel, and extended downward about six inches from he bottom of the belt. They were so spaced that one was directly in front of each thigh. Then I covered the belt with leather and attached a buckle. By cinching the belt around my waist I was able to take very heavy weights from a rack onto the hooks, give a great leg heave, pull high with my arms, and then return the weight to the hooks. By repeating this assistance exercise in reps ad sets I was able to handle over 1,000 pounds with the high pulling muscles. I give this exercise credit for the pulling power that has enabled me to snatch 360 and clean 485 pounds. This is the first time I have ever written the details of this the greatest of all my assistance exercises.

This revelation I now gladly explain in the hope it will encourage some young lifter to realize accomplishments beyond his fondest dreams.